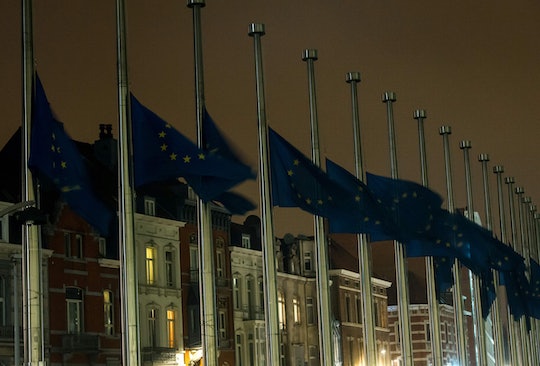 Following the tragic attacks in the capital city of Brussels in Belgium, which left at least 31 dead and hundreds more injured, countries all over the world began reaching out to show their support. In the United States, President Obama ordered that flags be flown at half-staff in honor of the victims. The order will remain in effect until March 26, and applies to all diplomatic, public, and military buildings around the world, as well as the White House.

Earlier in the day, the president, who has been visiting Cuba, preempted his prepared remarks on U.S.-Cuba relations by saying, "We will do whatever is necessary to support our friend and ally Belgium in bringing to justice those who are responsible." Later, in the official proclamation released by the White House, he wrote,

The American people stand with the people of Brussels. We will do whatever it takes, working with nations and peoples around the world, to bring the perpetrators of these attacks to justice, and to go after terrorists who threaten our people... As a mark of respect for the victims of the senseless violence... I hereby order that the flag of the United States shall be flown at half-staff at the White House and upon all public buildings and grounds.

Tuesday morning, at least two suicide bombs were detonated at the Zaventem Airport in Brussels, killing 10 and injuring 100 more. Around an hour later, a bomb ripped through a metro station in the suburb of Maalbeek, leaving 20 dead and injuring 130. ISIS quickly claimed responsibility for the attacks, and Belgian security forces are said to be working under the assumption that the attackers belong to the same network as those responsible for the Paris attacks in November last year, which killed 130.

The Brussels attacks come mere days after two different bombings in Turkey, one which killed at least 37 in the Turkish capital of Ankara, while the other killed at least 4 in Istanbul, making now an especially scary and sad time to be a human being. The attacks also occurred just days after investigators arrested Salah Abdeslam, Europe's most wanted man for his suspected role in the Paris attacks, in a Brussels suburb.

Obama faced some pushback on his reaction to the terror attacks, with some calling on him to cut short his trip to Cuba, and others questioning his attendance at a baseball game. "President Obama should be back in America keeping this country safe," current presidential candidate Sen. Ted Cruz said at a news conference. "Or President Obama should be planning to travel to Brussels." However, the president defended his earlier response, saying that "the whole premise of terrorism [was] to try to disrupt people's ordinary lives."

The last time the U.S. flags were flown at half-staff was on March 7, after Nancy Reagan's death. In addition to flags and official statements following the attacks in Brussels, social media has overflowed with condolences and expressions of support, and Paris illuminated the Eiffel Tower in the colors of the Belgian flag. Hopefully this show of unity can provide at least a measure of comfort for the people of Brussels in this terrible time.