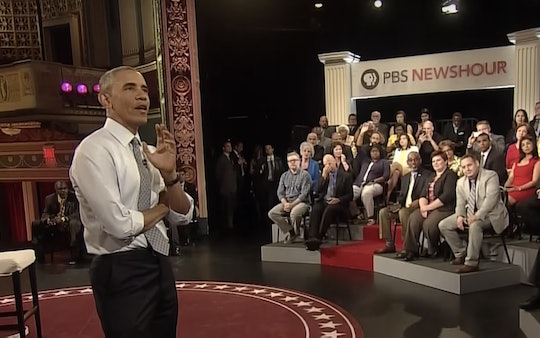 On PBS NewsHour on Wednesday, President Obama sat down with the network's Gwen Ifill for an interview, after which the floor opened to questions from the audience. Obama, who is well-known for his desire to implement stricter gun control laws in the United States, was questioned by a gun shop owner, Doug Rhude, who basically asked why the president wanted to "restrict and limit" responsible gun owners. In response, Obama's gun law comments hit the nail on the head, delivering a rational argument that was almost impossible to argue.

Rhude began by arguing that despite incidents of drinking and driving, "the good guys" in society are still allowed to use cars. "Then why do you and Hillary want to control and restrict and limit gun manufacturers, gun owners, and responsible use of guns and ammunition to the rest of us, the good guys," Rhude asked, "instead of holding the bad guys accountable?"

Obama began by disarming Rhude's argument. "First of all, the notion that I or Hillary or Democrats or whoever you want to choose are hell-bent on taking away folks’ guns is just not true. And I don’t care how many times the NRA says it," he said. "And at no point have I ever, ever proposed confiscating guns from responsible gun owners. So it’s just not true."

Obama went on to explain:

What I have said is precisely what you suggested, which is, why don’t we treat this like every other thing that we use? I just came from a meeting today in the Situation Room in which I got people who we know have been on ISIL websites, living here in the United States, U.S. citizens, and we’re allowed to put them on the no-fly list when it comes to airlines, but because of the National Rifle Association, I cannot prohibit those people from buying a gun. This is somebody who is a known ISIL sympathizer. And if he wants to walk in to a gun store or a gun show right now and buy as much — as many weapons and ammo as he can, nothing’s prohibiting him from doing that, even though the FBI knows who that person is.

Obama has been trying to change gun control laws for a long period of his presidency, but to little avail. Late last year, in a speech in which he sounded frustrated by GOP and NRA blocks, he announced his executive action on gun control, one way for him to take immediate action on firearm violence in the United States.

Whether you support the full abolishment of guns in the United States or would rather have several to defend your home, something's got to give. In 2015 alone, there were over 13,000 people killed by firearms, including 64 school shootings and 372 mass shootings, according to the BBC.

However, gun control is something that many people can very quickly split opinions on. Some believe that a ban on all guns would be best in a country riddled by gun violence, while others firmly believe in the Second Amendment. Obama seems to be taking the middle road — rather than advocating for a complete ban on firearms, he wants stricter background checks, the ability to track illegal firearm transfers, improvements in gun technology, and improvements in mental health care.

It's a smart approach — Obama, or whoever succeeds him, will need to win over gun bearers and NRA supporters if either he or they want to be able to pass any meaningful gun control laws. Stricter firearm laws will require a huge amount of public support if current opponents in the government and the NRA are to pass them, and Obama seems to be playing his cards with that in mind.

"There is a way for us to have commonsense gun laws," he told Rhude on PBS. "There is a way for us to make sure that lawful, responsible gun owners like yourself are able to use them for sporting, hunting, protecting yourself, but the only way we’re going to do that is if we don’t have a situation in which anything that is proposed is viewed as some tyrannical destruction of the Second Amendment. And that’s how the issue too often gets framed."

If we want to see a change in the number of shootings that riddle the United States, we need that reframing to happen soon — along with the implementation of the gun control laws that come with it.