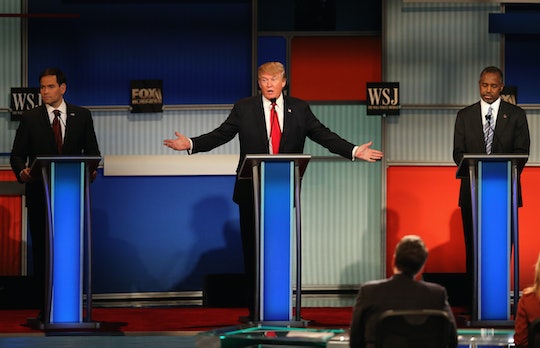 Presidential Candidates' Reactions To The San Bernardino Shooting Include A Lot Of Prayer, Less Action

Earlier: Wednesday afternoon at about 2:15 p.m. up to three active shooters opened fire in San Bernardino, Ca., upwards of 14 people and killing upwards of 14, authorities said in a press conference. As they have in response to the spate of mass shootings recently, the 2016 presidential candidates and other politicians shared their reactions to the San Bernardino shooting on Twitter.

The shooting occurred at the Inland Regional Facility, a center for individuals with developmental disabilities, and early reports indicated that there might be a bomb on the scene. According to reports, the shooting occurred in the conference area of the multi-building facility. Two of the shooters have since been caught by the authorities, and one of them has been identified as a female.

As news of the shooting spread, the 2016 presidential candidates took to Twitter to express their condolences and call for the change that has been slow in coming. There have been 352 mass shootings in the U.S. in 2015, but the country remains deeply divided about how to address the crisis.

Here's how the 2015 presidential candidates responded to the violence in San Bernardino:

Martin O'Malley Fired Off At The NRA

Hillary Clinton Vowed Not To Be Complacent

So Did Ben Carson

So Did Chris Christie

So Did Rand Paul