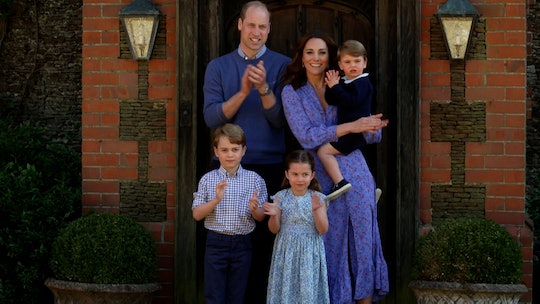 It's a special occasion when people get to see new photos of the United Kingdom's youngest royals, let alone hear them speak. But in a new video uploaded to Instagram over the weekend, people got to hear the voices of Prince George, Princess Charlotte, and Prince Louis — and their little British accents are just as charming and adorable as you always expected.

Prince William and Kate Middleton, also known as the Duke and Duchess of Cambridge, took to Instagram over the weekend to share the sweetest video of their three kids asking naturalist David Attenborough some hard hitting questions about animals (after meeting with him late last month).

"Hello, David Attenborough," 7-year-old Prince George said in the video. "What animal do you think will become extinct next?"

"Well, let's hope there won't be any," Attenborough replied, saying that he hopes conservation efforts will ensure that animals that are in danger of extinction will be protected.

5-year-old Princess Charlotte, who reportedly is an animal lover, shared her favorite creature with the documentary filmmaker. "Hello, David Attenborough! I like spiders, do you like spiders too?," she asked in a rushed voice, looking off to the side of the camera. Attenborough's response? "I love spiders!," he replied. "I'm so glad you like them."

Finally, 2-year-old Prince Louis was the last to ask Attenborough a question, reportedly speaking on camera for the first time, ever, according to Elle. "What animal do you like?!," the little boy asked, pronouncing animal like "amimal." "I think I like monkeys the best," Attenborough confirmed.

It seriously doesn't get any cuter than this.

It's only fitting for the Cambridges to be asking Attenborough questions about animals. The royal family has pets, including a black cocker spaniel named Lupo, and the kids reportedly love chickens, according to Vanity Fair. But Princess Charlotte is also a fan of mythical creatures in addition to spiders, according to Harper's Bazaar. Prince William reportedly told a young girl during an official royal appearance last year that his only daughter is a big fan of unicorns. "My daughter loves unicorns," he said. "Loves them."

The little royals aren't the only ones who love nature and its lifeforms — Prince William does, too. The Duke of Cambridge is the star of a new ITV documentary, Prince William: A Planet For Us All, which will air sometime this month, according to People. In a clip from the documentary, Prince William explains his motivation for trying to do his part to help the planet. "Now I've got George, Charlotte, Louis, in my life, your outlook does change. You want to hand over to the next generation, the wildlife, in a better condition."