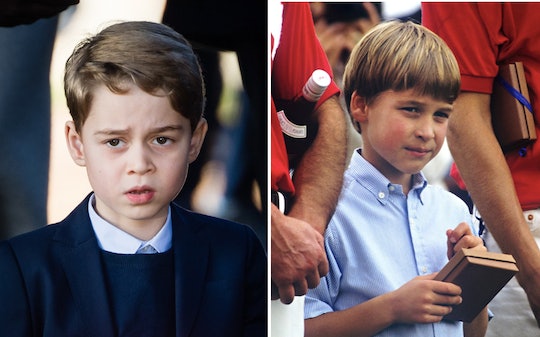 Kate Middleton and Prince William's oldest son turned one year older on July 22, and of course the Duchess of Cambridge celebrated by taking some new snapshots of her little boy. And if you look closely at Prince George's 7th birthday photos, you will probably be amazed at just how much the young royals looks like his dad Prince William when he was the same age.

Prince George was born on July 22, 2013, making him a whopping 7 years old. As the oldest child of the Duke and Duchess of Cambridge, Prince George is currently third in line to be King of England after his grandpa Prince Charles and dad Prince William. As a young boy who is destined to be king, you might expect his official photos to be pretty formal, but that is simply just not how his parents roll. Especially since his mom is an avid photographer.

In his official birthday photos, shared through Kensington Palace's Instagram page, Prince George is seen grinning and wearing two different army green shirts, one in a camouflage print, which could potentially be seen as a nod to his dad's past as a pilot for the Royal Air Force Search and Rescue Force.

Perhaps it's the sight of Prince George in his camo print shirt that has him looking so much like his dad at the same age. Or his hair. Or his face. You decide.

Certainly there were plenty of royal watchers who took to the Prince George's birthday photos to marvel over the similarity between father and son. One social media commented on Instagram, "Happiest birthday sweet Prince George all the way from Australia you’re getting more and more like your daddy every day," while another simply wrote "Daddy’s double."

Prince George's birthday celebration plans have not been shared with the general public, but it seems likely the family will celebrate quietly at home due to the pandemic. Fortunately for Prince George, he has two siblings, 5-year-old Princess Charlotte and 2-year-old Prince Louis, so he'll have people to play with on his special day.

He'll also apparently have some chickens to hang out with, if that's his thing. According to The Sun, the Cambridge family reportedly has a chicken coop at their country home of Anmer Hall in Norfolk County, where the royal kids have been busy collecting eggs and generally living their best farm life.

Prince George seems pretty blessed for his birthday. Fresh eggs from his chickens and good genes from his dad.

More Like This
Meghan & Harry Celebrated Their Anniversary As A Family Of Four For The First Time
Why Prince Harry Feels Lucky To Be A "Father With A Platform"
Prince George Has Apparently Known He'll Be King Someday For A While Now
Kate Middleton Explains Why Her Kids Couldn't Attend The Top Gun: Maverick Premiere