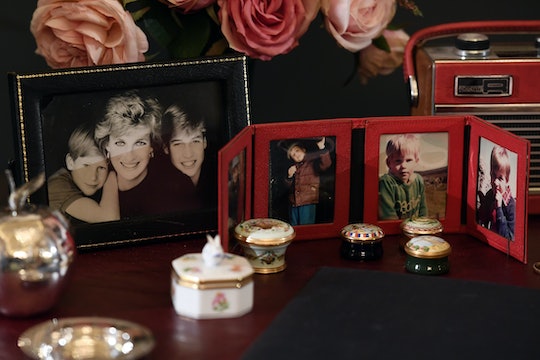 The youngest member of the royal family was christened Saturday before a small group of family and friends during a private ceremony in Windsor Castle. And while the guest list for the christening was kept to a mere 25 people, Prince Harry kept Princess Diana's memory alive at Archie's christening in a truly meaningful way. A family photograph snapped to commemorate the day showed Princess Diana's sisters were included in the festivities.

Buckingham Palace announced that little baby Archie, whose full name is Archie Harrison Mountbatten-Windsor, had been christened during a service officiated by the Archbishop of Canterbury in the Queen's private chapel. Ultimately, the Duke and Duchess of Sussex chose to keep baby Archie's christening a completely private affair, giving neither the press nor the public a peek at their son. They did, however, release two photos to mark Archie's christening, noting they were "so happy to share the joy of this day with members of the public who have been incredibly supportive since the birth of their son."

While one of the photos was an intimate black-and-white portrait of the Sussexes, the other featured members of Archie's extended family posed in the Green Drawing Room at Windsor Castle. In the photo, the Sussexes are surrounded by Prince Charles and his wife, Camilla; Prince William and his wife, Catherine; Markle's mother Doria Ragland; and two of Princess Diana's siblings: Lady Sarah McCorquodale and Lady Jane Fellowes.

"Their Royal Highnesses feel fortunate to have enjoyed this day with family and the godparents of Archie," a statement released alongside the photos read.

While their names may not be familiar to anyone who isn't an avid royal family follower or Princess Di fan, the two women are Princess Diana's older sisters. Both were present, along with younger brother Earl Charles Spencer, at Prince Harry's wedding to Markle in 2018. In fact, in a statement released just days ahead of the nuptials, Buckingham Palace noted that Prince Harry was "keen to involve his mother's family in his wedding."

All three of Princess Diana's siblings were reported by Buckingham Palace to be in attendance at the wedding with Fellowes said to have given a reading during the ceremony. "Prince Harry and Ms. Markle both feel honored that Lady Jane will be representing her family and helping to celebrate the memory of the late Princess on the wedding day," the statement from the palace read.

In fact, it seems as if Prince Harry and Markle have been making an effort to include Diana's siblings in their son's life since the beginning. When Archie's birth was announced by Buckingham Palace in May, it was noted that all three of Diana's siblings were among the first to be notified. "The Queen, The Duke of Edinburgh, The Prince of Wales, The Duchess of Cornwall, The Duke and Duchess of Cambridge, Lady Jane Fellowes, Lady Sarah McCorquodale and Earl Spencer have been informed and are delighted with the news," a statement from the palace read.

What's more, it was later reported that Fellowes was one of the first family members to actually meet Archie face-to-face following his birth. If these early events are any indication, it's likely that Prince Harry plans to make his mother's memory a key part of his young son's life.