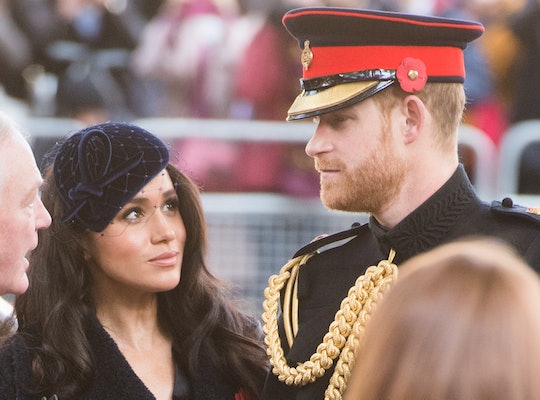 During a candid and eye-opening video chat with fellow leaders from The Queen's Commonwealth Trust in response to the powerful Black Lives Matter movement, Prince Harry and Meghan Markle discussed the prevalence of racial biases and racial injustices and addressed the need to stand up to these issues.

In a video shared Monday, the Duke and Duchess of Sussex, sitting side-by-side, joined a few members of The Queen's Commonwealth Trust — an organization Prince Harry and Markle serve as president and vice president, respectively — for a video chat on "fairness, justice and equal rights." During the 20-minute call, Markle said she felt the global Black Lives Matter movement that's sparked protests around the world in the aftermath of George Floyd's killing a "moment of reckoning."

"I think this is a moment of reckoning," Markle said. "Where so many people go 'You know, I need to own that. Maybe I didn't do the right thing there. I knew what I knew, however, now it's time to reset in a different way.'"

Prince Harry added that institutional and systemic racism continue to exist because "someone, somewhere is benefitting from it." "We can't deny or ignore the fact that all of us have been brought up and educated to see the world differently," the Duke of Sussex said. "However, once you start to realize that there is that bias there, then you need to acknowledge it. You need to acknowledge it, but then you need to do the work to be able to become more aware."

"It's not even in the big moments, right?" Markle added. "It's in the quiet moments where racism and unconscious bias lies and ... hides and thrives. And it’s those nuances that I think is what makes it confusing for a lot of people to understand the role that they play in that, either passively or actively. But I think even more so passively."

Markle went on to say that it's "not enough to just be a bystander" to enact change and address systemic racism. "It’s not enough to just be a bystander and say, 'Well, it wasn’t me,'" the Duchess of Sussex said. "And that’s what I think was very much manifested in what you’re feeling from people’s outpouring surrounding the murder of George Floyd. It wasn’t that this wasn’t always happening, it’s that it’s come to a head at a time when people just said, 'Enough.'"

This, of course, isn't the first time Markle or Prince Harry have openly denounced racism. Last week, for instance, in a speech for the Diana Award ceremony, Prince Harry vowed to do his part to be part of the "solution" to end institutional racism and unconscious bias. Meanwhile, Markle has also been outspoken about her own experience with racism throughout her career. Most recently, she delivered the commencement address at her old high school, where she urged the graduating class to be a part of the change.

During their most recent video chat, the couple addressed how the Commonwealth, which is made up of 54 nations, could move forward, with Prince Harry saying the first part is to acknowledge its colonial past. "When you look across the Commonwealth, there is no way that we can move forward unless we acknowledge the past," Prince Harry said. "So many people have done such an incredible job of acknowledging the past and trying to right those wrongs, but I think we all acknowledge there is so much more still to do."

"It's not going to be easy, and in some cases it's not going to be comfortable, but it still needs to be done because, guess what? Everybody benefits," he continued. "So I think there's a hell of a lot that we together need to acknowledge, but I only see hope and optimism in the fact that we can only do this together."

Markle added that while some of these conversations will be uncomfortable to have right now, it's necessary to do so. "We have to, in this moment in time, say 'We're going to have to be a little uncomfortable right now,'" Markle said. "Because it's only in pushing through that discomfort that we get to the other side of this and get to a place where high tide raises all ships. Equality does not put anyone on the back foot, it puts everyone on the same footing which is a fundamental human right."