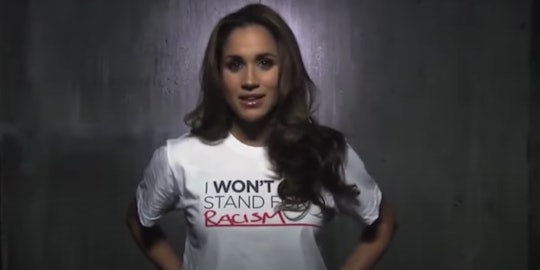 Amid nationwide protests in the wake of George Floyd's death in police custody — sparking important conversations about systemic racism, racial bias, and more — a video of Meghan Markle talking about her own experience with racism has resurfaced.

"I'm biracial, most people can't tell what I'm mixed with, and so much of my life has felt like being a fly on the wall," the Duchess of Sussex said in a PSA from 2012 for USA Network's "I Won't Stand For..." campaign. "And so some of the slurs that I've heard or the really offensive jokes, or the names — it has just hit me in a really strong way."

In the PSA, Markle went on share that she had heard someone direct a racial slur at her mother, Doria Ragland. "A couple of years ago, I heard someone call my mom the n-word," Markle said. "So I think for me, beyond being personally affected by racism, just to see the landscape of what our country is like right now, certainly the world, and to want things to be better."

"Quite honestly, your race defines you, and I think what shifts things is the world really treats you based on how you look," she continued. "Certain people don't look at me and see a Black woman or a biracial woman. They treat me differently than I think they would if they knew what I was mixed with, and I think that is — I don't know, it can be a struggle as much as it can be a good thing, depending on the people you're dealing with."

At the time of the PSA, Markle was starring in USA Network's legal drama, Suits. She went on tour with the campaign in 2012, speaking to high school students about her experience with prejudice and discrimination, as Greenville News reported.

Markle's life has changed immensely in the eight years since she filmed that powerful PSA. She's no longer an actress, she and Prince Harry welcomed her first child, 1-year-old Archie, and she has since stepped back from her senior royal duties. Even though her platform has changed, she's still vocal and passionate about denouncing racism. Earlier this week, Markle and Prince Harry voiced their support for the #BlackLivesMatter movement through the Queen's Commonwealth Trust.

"As a global community of young leaders we stand together in pursuit of fairness and a better way forward," the statement from Queen's Commonwealth Trust said on Twitter. "Silence is not an option. We all have the power to effect positive change. It is time to speak up and speak out. Time to have uncomfortable conversations with ourselves and with others. Time to educate ourselves and unlearn. Time to come together and build a better future as one."

In her 2012 PSA, Markle also looked to the future, a future that now includes her son Archie. "I hope that by the time I have children, that people are even more open minded to how things are changing and that having a mixed world is what it is all about," she said. "I mean certainly it has made the world a lot more beautiful and a lot more interesting."