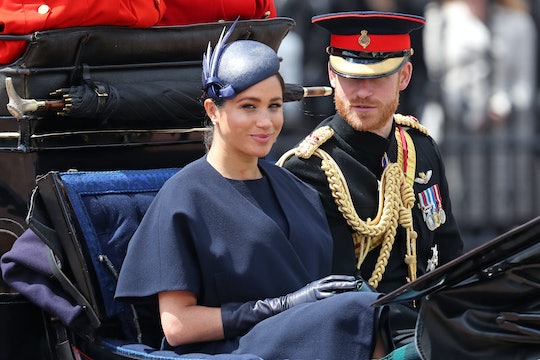 Prince William just turned 37 and the whole royal family is sending him their well wishes. Presumably not just because he's the future King of England and kind of a big deal, but also because he is a member of their family. Which is something important to remember about the royal family, don't you think? They are an actual family. So when people got mad about Prince Harry and Meghan Markle's message to Prince William on his birthday, it feels a bit unkind. Because here's the thing; none of us know what this family is doing privately for Prince William's birthday so maybe let's not be too hasty to judge.

Let's go over the backdrop here for a moment. On Thursday Prince Harry and Meghan Markle formally extricated themselves from the Royal Foundation, a charitable organization that was started by Prince William and Prince Harry in 2009. The Royal Foundation has managed the charitable work of the previously-coined Fab Four, the Duke and Duchess of Cambridge and the Duke and duchess of Sussex, but the latter couple are branching out to start their own charitable organization. This move kept the rumor mill going that the two couples are secretly feuding (although I don't know if we can call it secret if it's basically written in every media outlet everywhere), and now Prince Harry and Meghan Markle's brief birthday message to Prince William on his birthday is making matters significantly worse.

The couple, who are new parents to 1-month-old baby boy Master Archie Harrison Mountbatten-Windsor, shared a message on the Kensington Palace Instagram page from their own @SussexRoyal social media feed that read:

Happy Birthday to the Duke of Cambridge!

OK, I know what you're thinking. That's awfully brief and a little cold sounding. That certainly appears to be the response most royal watchers had when they noticed the message, as per Kensington Royal Instagram:

So cold and impersonal!

One issue several social media users noted was that the couple should have followed the lead of Prince Charles, Queen Elizabeth, and even William's uncle the Duke of York and shared a post on their own Instagram feed wishing Prince William a happy birthday. But a look back at some of their other birthday wishes to royal family members proves a precedent has been set; Prince Harry and Meghan Markle are commenters, not posters.

They did the same for Prince Louis' first birthday in April, writing on social media in the same fashion as per TODAY:

Happy birthday Louis! Sending lots of love from both of us.

Actually, now that I'm looking at it... that message might have been a little frosty for Prince William.

All we can hope is they gave him a surprise birthday party to make up for it. Families can be funny sometimes, and it can't be easy to have everyone watching your every move... let's give them a little space maybe.