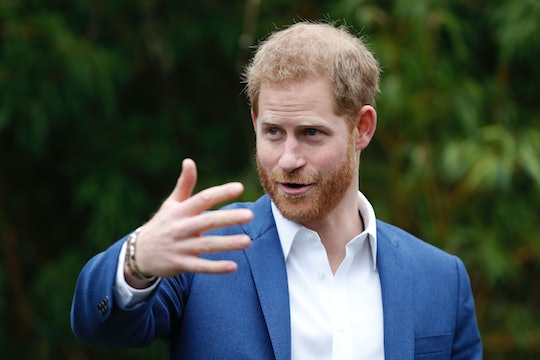 The world is anxiously waiting for the arrival of the newest addition to the royal family and, if recent news is any indication, Prince Harry is set to breeze through fatherhood. Indeed, a new video showing Prince Harry shushing a cute dog has onlookers in awe about his magical touch with little, sweet creatures.

The 34-year-old Duke of Sussex was planning to plant saplings on Wednesday with young students from St. Vincent’s Catholic Primary School as part of a Queen’s Commonwealth Canopy project when he was approached by Winnie, the principal’s dog, according to People. And footage posted by People's Simon Perry on Twitter shows the soon-to-be-father bending down to pet Winnie, who excitedly jumps toward the prince and wags her tail as she’s held on a leash.

After patting her head, as the video shows, Prince Harry raises his finger to his mouth to shush the playful dog, who quickly obeys and sits for the remainder of her head rub.

If you haven't been keeping track, it won’t be long until Meghan Markle gives birth to the couple’s first child this spring. And if this adorable interaction with a pooch is any indication, Prince Harry is going to nail fatherhood with his magical soothing abilities.

Of course, this isn’t the first time the Duke of Sussex has won hearts across the globe. For instance, just days after the royal couple announced the news of their pregnancy in October of last year, Prince Harry was spotted letting a little boy named Luke tug his beard at a meet-and-greet in Australia, as Elle reported at the time. Luke caught the attention of the father-to-be and revealed that his favorite person is Santa Claus, according to Elle, which is presumably why he pulled at Prince Harry’s ginger beard. Awww.

And some time before that Prince Harry was caught in Toronto sharing his popcorn with a 2-year-old girl at the 2017 Invictus Games, as reported by Vanity Fair.

The video shows Prince Harry making playful faces at the little girl and teasing her with the bucket of popcorn before giving into her wishes to steal his snack of choice.

More recently, Prince Harry was caught in yet another adorable move that made onlookers giggle. The Duke and Duchess of Sussex were attending an event at London’s Canada House for Commonwealth Day when the pair received a cute baby outfit complete with a onesie, socks, hat and mittens, and little leather moccasins, according to Yahoo! Lifestyle.

When gifted the ensemble, Prince Harry lifted the little shoes to sniff their insides. “I’m sniffing the insides to check if they are leather or not, not because they are smelly,” he told the giggling staff, according to People.

Ever since the Duke and Duchess of Sussex announced they were first expecting last fall, all eyes have been on the royal couple as they make their way toward the finish line following nine months of restless waiting. And throughout it all, Prince Harry has only increasingly convinced onlookers that he is going to make great father material once he and Markle welcome their bundle of joy.