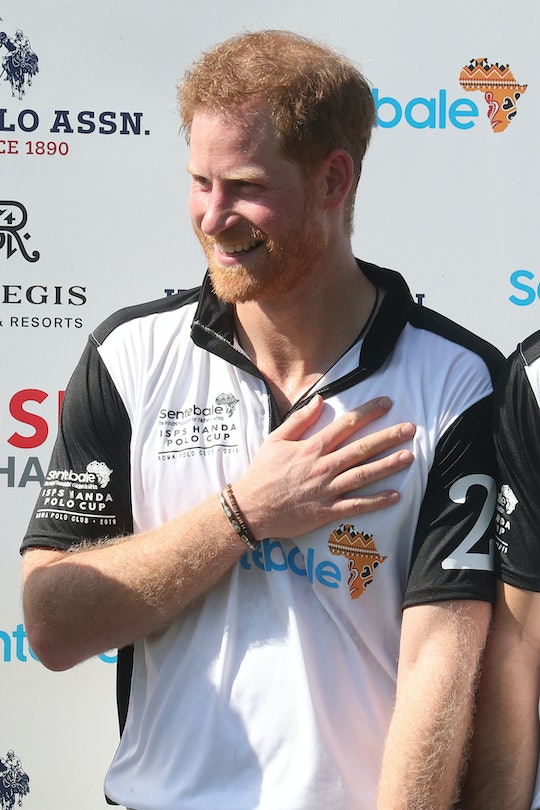 Prince Harry has a lot going on these days. In addition to being a new dad, he's been busy with royal engagements. For example, the Duke of Sussex recently jetted to Italy to play in a charity polo match with Nacho Figueras, who had a lot to say about his longtime pal. Prince Harry's friend called the royal "inspiring" in a moving tribute, and it's almost too much to handle.

After the new dad wrapped up his trip to Rome, Figueras shared some kind words about him on social media. Amid criticism about the prince leaving his son, Archie, for the first time, the Argentine polo player took a stand. He said in an Instagram post he's "been fortunate enough" to spend time with Harry, 34, throughout the years, and truly get to know him. Figueras praised him as "kind, generous, compassionate," and more in the post, touting his work with Sentebale, his charity aimed at helping African youths affected by HIV (according to its website). Prince Harry's pal went on to describe his work, writing that he spends so much time "talking openly about mental health, encouraging children or talking about climate [change] and all the things we all human beings need to change for the next generations."

"I see him do that over and over again and it is truly inspiring," Figueras wrote on Instagram. "I am honored to be your friend and let's keep fighting because if we all fight together love always wins."

This isn't the first time Figueras has had Prince Harry's back. Ahead of the big match, Prince Harry's teammate in the match came to his defense, shutting down critics who felt the overnight trip came too soon after Archie's birth. Figueras told HELLO! Magazine Harry is "a wonderful father," and is doing a "fine" job.

"I am a father of four and sometimes duty calls, this is 24 hours away from the house, I think he's doing just fine," he said, according to the magazine. "He's a wonderful father and very present and he's here for an amazing cause so I don't see it as a problem."

Although the polo match marked Prince Harry's first night away from the royal baby since his birth, it's not the only trip he's made in that time. Days after wife Meghan Markle welcomed their son, the duke stepped out to attend an Invictus Games event in The Hague, according to CNN. During the event he was very focused on his new role as dad, and even received several baby-centric gifts, including a jacket with "daddy" embroidered on it. He proudly sported the jacket throughout the event, obviously.

Taking time away from your kids is never easy, but when you've got friends like Figueras in your corner supporting you it's a little less difficult. Prince Harry is undoubtedly a doting father, and he's skillfully balancing work and home life. Hopefully dad-shamers realize that in time, and cut him a little slack. Regardless, neither Prince Harry nor his crew seem too bothered.