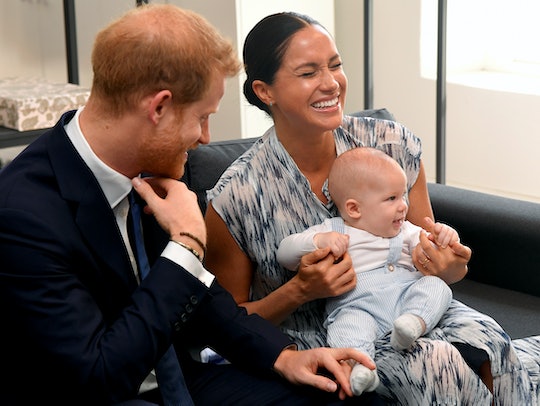 Prince Harry obviously leads a life of privilege as a member of the British monarchy, but it clearly comes at a cost. Sure, he gets to live on the grounds of Windsor Castle in a gorgeous estate and visit gorgeous places all over the world and everything. But he also has had to deal with a total lack of privacy most of his life. His own mother Princess Diana died in a car crash when he was just 12 years old trying to escape the paparazzi. And he's clearly done with all of it. Prince Harry's latest lawsuit lobbied against two major British tabloids makes his point crystal clear; he will put the safety of his family above all else. And perhaps his determination might even change the way the tabloids treat people who are in the news.

When Prince Harry and his wife Meghan Markle were on their royal tour of southern Africa earlier in the week with their 5-month-old baby boy Archie, they looked to be having the time of their lives. More relaxed than royal watchers had seen them in ages as they brought Archie to meet Archbishop Desmond Tutu for his first official royal outing, reported The Guardian. Generally appearing to be very much a united front.

Perhaps because Prince Harry had come to an important decision to start holding media outlets accountable for some reportedly shady dealings.

On Friday, Byline Investigates revealed that a lawsuit was filed on behalf of Prince Harry against two media giants in the United Kingdom, The Sun and The Mirror. The lawsuit, which was filed by Prince Harry's lawyers at Clinton LLP, alleged that both media outlets had misused his personal information in an effort to generate stories. Buckingham Palace confirmed the legal action as did News Group Newspapers, which publishes The Sun, as per BBC. Both newspapers allegedly illegally hacked into the Duke of Sussex' private voicemail, and he is simply not having it. As a source told Byline Investigates, this lawsuit could see a historic change between British royalty and the media:

An appearance by the Prince in the witness box would immediately make this an historic moment in British law. There are strong matters of principal at stake here for the prince.

This is actually the second lawsuit Prince Harry has filed against a British media outlet in recent weeks. On Thursday he released a statement explaining that he was suing The Daily Mail for publishing a private letter between his wife Meghan Markle and her estranged father Thomas Markle. He also noted in his statement, as per Cosmopolitan, that the British tabloids have been "waging campaigns" against his wife:

Unfortunately, my wife has become one of the latest victims of a British tabloid press that wages campaigns against individuals with no thought to the consequences—a ruthless campaign that has escalated over the past year, throughout her pregnancy and while raising our newborn son.

I realize there is an argument to be made that the British monarchy exists to serve the people or whatever. But Prince Harry, Meghan Markle, and little Archie are allowed to feel safe and protected no matter what their status. Especially since, as Prince Harry sadly noted, he had already watched his own mother suffer under the ruthless "bullying" of the British tabloids before her death in 1997:

My deepest fear is history repeating itself. I've seen what happens when someone I love is commoditised to the point that they are no longer treated or seen as a real person.

Celebrity is one thing. Family is another. I think we all know now exactly what matters most to Prince Harry.