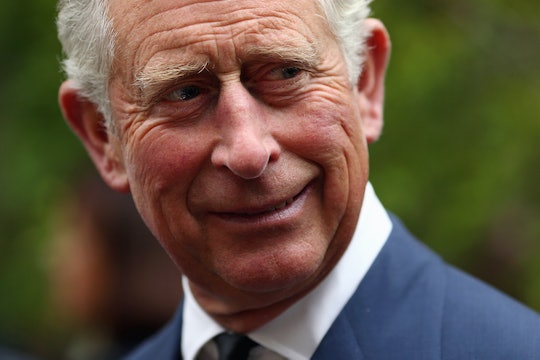 Even future kings melt when they get hugs from their adorable grandchildren, as evidenced by this precious photo of Prince Louis and his grandpa, Prince Charles. To celebrate the young royal's second birthday, Clarence House shared a photo of Prince Charles holding onto his little grandson and it's enough to make anyone a little emotional.

Prince Louis, the youngest child of the Duke and Duchess of Cambridge, turned 2 years old on Thursday, April 23. He celebrated at home with his parents and his older brother and sister, 6-year-old Prince George and 4-year-old Princess Charlotte. Sadly, Prince Charles could not join his grandson for his birthday as he recently recovered from contracting the coronavirus. While the Prince of Wales' bout of illness was mild, like the rest of the United Kingdom, he's continuing to practice social distancing and could not visit little Prince Louis for his birthday. But his grandson is clearly in his thoughts.

"A very Happy Birthday to Prince Louis, who turns two today," Clarence House captioned a photo of Prince Charles and his grandson shared on social media. "The young Prince enjoys a hug from his Grandfather, The Prince of Wales." The black-and-white photo, which Kate Middleton snapped, was genuinely heartwarming, perhaps especially since they couldn't be together for Prince Louis' special day.

Prince Charles is apparently an excellent grandfather, as Prince William said in the PBS documentary Prince Charles at 70 in 2019. He explained that his father "is the fittest man I know, but I want him to be fit until he is 95 and on. So, having more time with him at home and playing around with the grandchildren would be lovely. When he’s there, he’s brilliant but we need him there as much as possible."

From the looks of a 2019 photo of Prince Charles bonding with Prince Louis for his 70th birthday photo shoot, it seems his grandson would agree.

Prince Charles has four grandchildren, including Prince Harry and Meghan Markle's 11-month-old son Archie, as well as five step-grandchildren with wife Camilla Parker Bowles, so he presumably knows a thing or two about little ones. But the look of absolute joy on his face when Prince Louis is hugging him in his birthday photo is all the evidence a person needs that the love of a child never gets old.