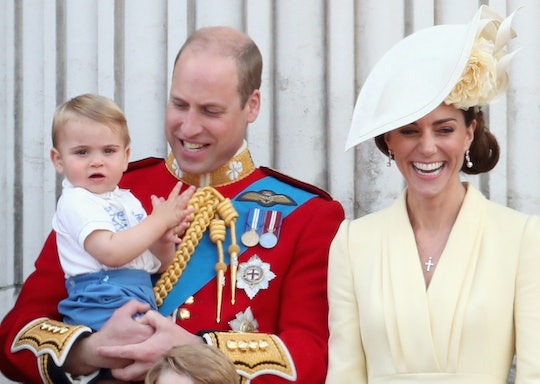 Every year, the royal family gathers in London for Trooping the Colour, an official celebration of Queen Elizabeth II's birthday marked by a parade and a tradition that can be dated back to over 260 years. This year's festivities not only celebrated the Queen's 93rd birthday, but it also included a throwback reminiscent of Prince Harry and Prince William's childhood. Of course, you may have thought Prince Louis' latest royal outfit was cute, but there's an even sweeter backstory behind it you may not have caught.

Buckle up for cuteness because, as it turns out, according to Entertainment Tonight, Prince Louis' uncle Prince Harry actually wore it to the celebration as a toddler himself during his second appearance at a Trooping the Colour event in 1986. What's more, as Hello! Magazine reported, his dad Prince William also wore the cute duds back in 1984.

Prince Louis, Kate Middleton and Prince William's 1-year-old son, made his first official royal appearance at Trooping the Colour on Saturday on Buckingham Palace's balcony after the annual parade, where he was seen in a white collared button-down detailed with blue stitching and a pair of matching blue shorts. And the outfit was identical to Prince Harry and Prince William's, according to ELLE.

In the 1984 photo, according to Hello! Magazine, Prince William is seen wearing the outfit during a trip to Balmoral with his dad Prince Charles. And in the 1986 photo, Prince Harry is being held by Princess Anne, Prince Harry's aunt and Queen Elizabeth's only daughter, as he also looks from the balcony, as The Daily Express reported. Coincidentally, both Kate, who is seen holding Prince Louis in the event's photos from this weekend, and Princess Anne in 1986 wore similar pale yellow outfits as a backdrop contrasting the toddlers' blue-and-white looks.

This year, Prince Louis joined his older siblings, 5-year-old Prince George and 3-year-old Princess Charlotte, at the Trooping the Colour event. Making the fashion of the day even sweeter, the three children all wore coordinating white-and-blue outfits as they joined other members of the royal family and looked out from the palace's balcony.

This isn't the first time royal children have worn hand-me-downs, according to Marie Claire. In fact, members of the royal family have oftentimes swapped baby outfits. In 2015, Prince George, who was 1 year old at the time, was dressed in the same baby blue outfit worn by his father, Prince William, as a toddler in 1984, Entertainment Tonight reported.

And in a family outing to the RHS Chelsea Back to Nature Garden, Prince Louis was photographed wearing red striped shorts which were previously also worn by his older brother Prince George, according to TODAY.

In his first appearance at the event this year, Prince Louis impressed everyone with his royal wave. The toddler waved vigorously at the crowd, appearing natural on the balcony, while his mother seemed amused at his excitement and Prince William held the toddler.

The 1-year-old even waved to his grandfather, Prince Charles, when the royal family turned to exit the balcony.

At one point during the ceremony, the toddler was even captured sucking his thumb. While considered normal behavior for any other 1-year-old, thumb-sucking has never been practiced by either of his older siblings at official occasions, as People pointed out. This time, Duchess Kate can be seen gently removing Prince Louis' thumb from his mouth.

The youngster celebrated his first birthday just recently, on April 23, which means he is the same age that his older sister Princess Charlotte was when she made her first debut at a Trooping the Colour event in 2016.

At just one year of age, the little toddler was already dressed to impressed in his hand-me-down shirt. Coupled with his enthusiastic royal waves and laid back attitude, everyone now knows that Prince Louis was made for the spotlight.