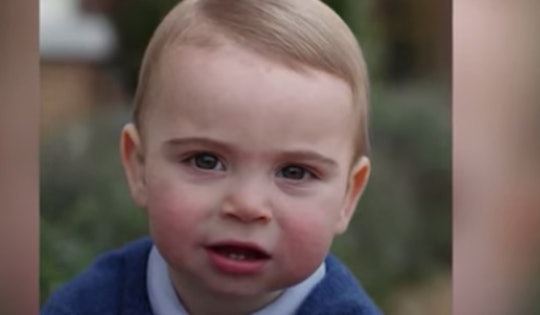 He only just turned 1, but this young royal is ready for his close-up. With news coming out of London that Prince Louis's Buckingham Palace Balcony Debut will take place at the Trooping the Colour Parade, I really can't wait to see all the Cambridge clan's cuteness.

As People magazine reported, royal watchers' hopes that the youngest of Prince William and Kate Middleton's kids would officially participate in the U.K.'s annual Trooping the Colour parade have been met with the happy news that the second youngest royal of all (next to newborn Archie Harrison Mountbatten-Windsor, that is), will indeed make his official debut at this coming Saturday's festivities in the British capital, to honor Queen Elizabeth's birthday.

Why all the fuss? After all, you've probably noticed pics of little Louis growing up this past year, from the hospital steps where he (and his older siblings? all first met the press to his royal christening. And just recently, fans got to view delightful video of Louis toddling around a garden his mum co-designed.

So we've seen the cute little guy already, but the difference is, the Trooping the Colour parade is that fancy, official one where the entire extended Windsor clan shows up, pastel hats and summer-colored wardrobe and all, and waves and smiles from the palace balcony.

‌It turns out that serious royal-watchers track exactly who did what on the Buckingham Palace balcony every year, and it's a big deal.

Especially since the Queen has never, ever missed the occasion... except for the one year in her reign in which it was called off due to a train strike, as Hello! magazine recently detailed about the massive event, which is so important it boasts a dress rehearsal.

‌And for those (myself included) who have fallen in love with the younger generations of the British royal family, the balcony action is really, really entertaining.

In recent years, all the royal cousins have attended. (Prince George and Princess Charlotte, both of whom made their childhood debut at the Trooping the Colour somewhere between ages 1 and 2, just as their little brother is about to do, have participated in the royal pageantry.)

‌Last year's Trooping was kind of epic, as far as the royal kids are concerned, as OK! magazine detailed, with mini-royal Savannah Phillips putting her hand over George's mouth as Charlotte giggled next to them. Enough to upstage the monarch herself, right?

As the U.K.'s Express newspaper noted, this year's festivities not only mark a public debut for little Louis, they are also expected to include new parents Prince Harry and Meghan Markle, minus Archie, as well as a newlywed Princess Eugenie and hubby Jack Brooksbank. And don't forget all the parental royals, including Prince Charles, Princess Anne and Prince Andrew, the newspaper noted.

Of course, exactly what mischief the kids will get up to this year as they sit up in that balcony remains to be seen (last year, George even did some nose-picking, as most kids do, Hello! added).

And since it's been previously confirmed that back when Duchess Kate's kids were smaller, they were actually present at the event, just inside Buckingham Palace somewhere with the Cambridge family nanny, there will be a lot to speculate about this year and whether or not baby Archie is present but off-camera somewhere, with a nanny we haven't yet heard about.

You just never know with this fascinating bunch of royals, so stay tuned!