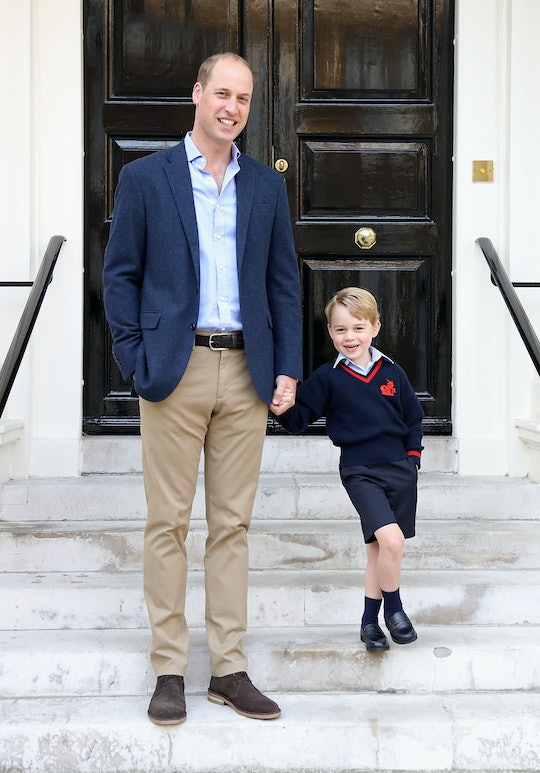 It’s that back-to-school time again and it has everyone is feeling a little nostalgic for these years that are passing too quickly. So, let’s take a minute to celebrate that days that have really gone by, with some throwback photos of Prince William and Prince Harry's first days of school, some from nearly 30 years ago.

While it’s wonderful to see the grown-up princes hard at work today — being responsible husbands, fathers, and general citizens of the world — nothing is quite the same as remembering a time when they were just wee royals in shorts, like 5-year-old Prince George dons on the reg. At the time, their mother, Princess Diana, was the darling of the world, and was generally on-hand for whatever her sons were getting up to, including their first days of school.

Kensington Palace was kind enough to give everyone a reminder of those days with a few archival photos of both Prince William and Prince Harry on the first day of primary school at Wetherby, in 1987 and 1989, as PopSugar noted last year. That was a big deal at the time; according to PopSugar, Prince William was the first member of the royal family who was educated completely within the public school system.

Just Look At These Two

On his first day of class, as you can see in the photos above, Prince William appeared to be slightly resigned to the idea of heading off to classes for most of the day as he stood with the headmistress and gave a very grown-up wave and smile on the steps of the school. Two years later, as his brother Prince Harry joined for his own first day of school, according to Town & Country, the elder prince was an old pro with his leather backpack. But what exactly is Prince Harry carrying? A pillowcase? Perhaps he had an entirely different idea about what was supposed to happen during the school day, but with the confidence of that handshake and smile he looked like he was excited for whatever it was going to be.

Backing things up for just a moment, before the boys ever got to Wetherby, they already had a year of nursery school under their belts. According to Hello! Magazine, the princes first learned to spend time away from home by attending Mrs. Mynors’ Nursery School for about two hours every morning. On Prince William’s first day, he left school and showed off a mouse finger puppet to the waiting photographers, as Hello! Magazine reported.

You can watch a video of the adorable moment below:

According to TODAY, Princess Diana was a nursery school assistant herself, prior to marrying, so it made perfect sense for her to want to see her sons progress through the public school system. Both the princes attended Wetherby until they were 8 years old, at which time they left for a boarding school named Ludgrove, according to PopSugar and Now To Love. Then at 13 years old it was off to another boarding school, Eton College, according to The Cut. That famous institution has turned out 19 prime ministers and beloved Brits like Eddie Redmayne and Tom Hiddleston, as noted by The Cut.

For Prince George’s schooling, his parents have again made their own choices. Rather than continuing on with the old alma mater, they decided to send Prince George to school at Thomas’s Battersea School in London, according to People. In 2017, some adorable photos were snapped of Prince William leading his son in on that first day, with the young prince looking much more concerned than either his father or uncle had. Perhaps it was the absence of his mother that was worrying him; Kate Middleton was at home at the time with hyperemesis gravidarum during her pregnancy with Prince Louis, according to Business Insider.

For Princess Charlotte, the royals have made a personalized decision again, sending he off to Willcocks Nursery School for her first year, according to People. Humorously enough, after Prince George's first few days of school last year, his father revealed that young George wasn't all that impressed with being away at school all day. As The Telegraph reported, the Duke of Cambridge told another parent that he'd just dropped Prince George off and "he didn't want to go."

More Like This
Prince William Was Quick To Remind Someone That He Does School Drop-Off Duty Too
Queen Elizabeth's Corgis Will Be "Spoiled Rotten," According To Prince William
The Cannon Legacy Is Strong: Here's A Look At All Of Nick Cannon's Kids
Goldie Hawn & Kurt Russell Got Royally Dressed Up For Their Granddaughter's 4th Birthday Party