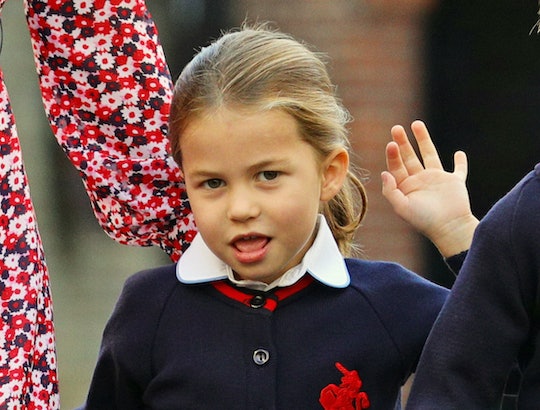 Princess Charlotte Likes The "Heat" Of This Spicy Dish, Just Like Her Mama

Kids are known to be pretty particular when it comes to food, but sometimes their tastebuds surprise you. Like 4-year-old Princess Charlotte, who's apparently a fan of spicy food, or one spicy dish in particular, according to her mom Kate Middleton. The young royal may love her dino nuggets like most kids her age, but it sounds like she's happy to explore different cuisines as well.

The Duchess of Cambridge loves to cook for her family, especially when it involves whipping up dishes from different places they've traveled to over the years. On Wednesday, Middleton and Prince William visited the Aga Khan Centre in London, where they met with key figures in the community and celebrated Pakistani culture, according to People. This was a fantastic primer for the couple, who are headed to Pakistan for a four-day work trip on Oct. 14, according to The Daily Express.

And during the event, according to The Sun, Middleton revealed that she often cooks curry at home, in two different batches for her husband and their three kids, 6-year-old son Prince George, 4-year-old daughter Princess Charlotte, and 1-year-old son Prince Louis. But cooking curry, a traditionally spicy dish, can be a bit of a challenge when making it for little ones.

"It's so hard cooking curry with the family though," she said, according to The Sun. "The children have a portion with no spice, yours is medium," she said to Prince William. "And I like it quite hot." But, apparently, Princess Charlotte is the exception for this. "Charlotte is pretty good with heat," she added.

Leave it to the sassy Princess Charlotte to be the only one out of her siblings to like the heat of spicy foods. It's not too surprising though, considering that every royal appearance she has made, Princess Charlotte has shown her own spice and flare. (Remember the time she told photographers they're "not coming" inside her brother's christening?)

This isn't the first time Middleton has talked about her love for the spicy dish, which is often cooked with vegetables. When the Duchess of Cambridge was pregnant with Prince George in 2013, she reportedly enjoyed eating vegetarian curry with a side of rice and naan bread, according to Us Weekly. But her love of curry didn't just stop once her pregnancy was done and her cravings were over. During a 2016 tour in Canada, in fact, Middleton said she loves cooking "curries" at home, according to The Mirror. And in a 2017 interview with the BBC's Radio One, Middleton said that the dish is also her and Prince William's favorite takeout food, according to TODAY.

Curry isn't the only yummy dish that Middleton cooks for her family. For example, during an official royal appearance at the Lavender Primary School in London, Middleton said that her kids love whipping up "cheesy pasta", according to PopSugar, and Princess Charlotte's "loves olives." Sounds like the 4-year-old royal's tastes could make for a pretty flavorful dish!

From cheesy pasta, to salty olives, and spicy curry, it sounds like Princess Charlotte is the adventurous eater out of the Cambridge kid bunch.