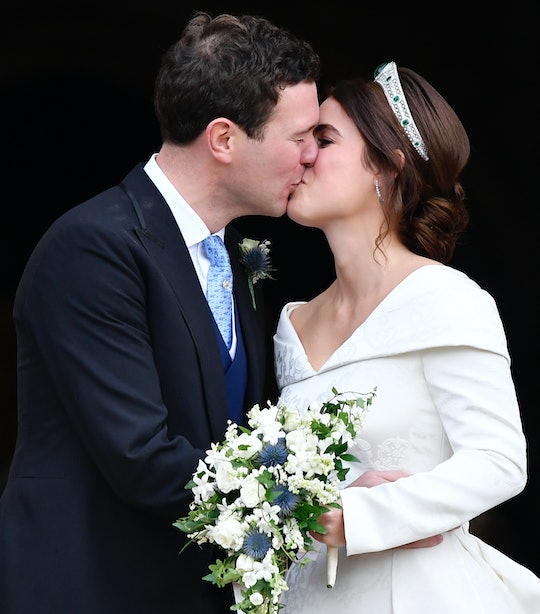 When your wedding is as beautiful as Princess Eugenie of York and Jack Brooksbank's, pretty much every photo — even the ones with closed eyes, sweat stains, and flying hats — still looks gorgeous. But the four official wedding portraits that Princess Eugenie and Jack Brooksbank released this weekend just might take the cake for the most stunning shots of the entire day.

Much like Prince Harry and Meghan Markle, Duke and Duchess of Sussex, Princess Eugenie and Jack hired a fashion photographer to take their wedding portraits, the Daily Mail reported. Harry and Meghan used Alexi Lubomirski, who took a slew of dazzling portraits of the royal couple on their wedding day. Princess Eugenie and Jack employed Alex Bramall, a British fashion and portrait photographer who has taken photographs for magazines including Harpers Bazaar, Vogue, and Vanity Fair, as well as for legendary fashion and portrait photographer Mario Testino, according to Bramall's website.

Two of Eugenie and Jack's four official portraits were taken in the White Drawing Room at Windsor Castle. One features their couple posing with their group of young bridesmaids and page boys, which included Prince George and Princess Charlotte. The other shot features the newlyweds, the bridesmaids, the page boys, the bride's parents (Prince Andrew, Duke of York and Sarah Ferguson, Duchess of York), the groom's parents, Eugenie's sister Princess Beatrice, Jack's brother Thomas, Queen Elizabeth II, and Prince Philip, Duke of Edinburgh. The Duke of York's official Instagram account shared the photos Saturday evening.

The third portrait is a black and white shot of Princess Eugenie and Jack sharing a kiss in the Scottish State Coach, which they rode in during the Carriage Procession after their ceremony, according to TODAY. As explained in the Duke of York's Instagram caption, the photo was taken as the couple returned to Windsor Castle following the procession. Thousands of photos were taken of the couple by photographers and fans during the busy procession, but the couple is sure to cherish this shot that Bramall captured during a more quiet moment.

Bramall snapped the fourth official photo of the couple as they headed into their private reception at Royal Lodge, Windsor (Prince Andrew’s royal home that Sarah Ferguson still lives in even after the divorce), according to People. For the reception, Eugenie wore an exquisite blush-colored dress designed for her by Zac Posen, the official royal website noted.

Posen also shared the photo to Instagram, alongside a message about to design the dress. "It was an incredible honor to create this dress for HRH Princess Eugenie on her wedding day," he wrote. "Her grace, elegance, and strength perfectly embody everything I could hope for in a woman wearing our design."

This was not the first time Bramall photographed Princess Eugenie. In late September, just about two weeks before her wedding, the princess shared a photo that Bramall took of her in 2016 for Harper's Bazaar. "#tbt to some serious daydreaming going on here," Eugenie wrote. "Pre-wedding vibes!"

Not only do Princess Eugenie and Jack look absolutely gorgeous in the official portraits, but they also both look over-the-moon happy to finally be married. Hopefully they are treating themselves to a relaxing honeymoon after their hectic wedding day!