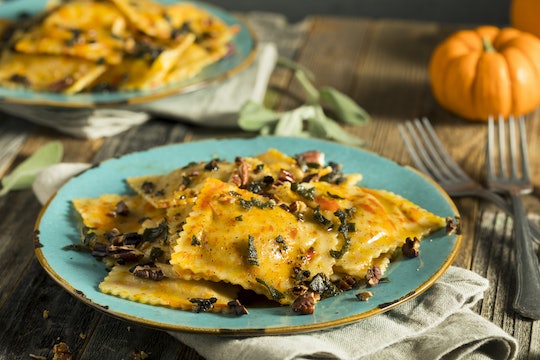 Will Carb-Loading All Of The Pumpkin Ravioli You Find Jumpstart Labor?

How to induce labor naturally is a pretty popular topic among pregnant women — especially pregnant women who are in the last trimester of their pregnancies. In those moments, you'll try anything. Apparently even eating pumpkin ravioli for labor induction. Oh yeah. This is a thing.

Though the idea of pasta inducing labor seems pretty hilarious (but no judgment, I know you’re desperate, I was, too), there are pregnant folks in my city who travel far and wide to go to Scalini's Italian Restaurant to eat their eggplant parmigiana because it’s supposed to induce labor. I may or may not have even tried it myself. It didn’t work, but I do know of a few ladies where it did work, and there is even a wall in the restaurant with pictures of eggplant parmigiana babies, along with a link on their website called "Eggplant Babies" where they so kindly give you the recipe. In fact, according to the Scalini's website, "To date, more than 300 of the pregnant women customers who ordered the eggplant have given birth within 48 hours..." Huh. Is it possible pasta — even the pumpkin ravioli variety — can induce labor? I mean it is the magical pumpkin-everything season after all.

Dr. Idries Abdur-Rahman, OB-GYN, author of Everything You Ever Wanted to Know About Pregnancy (But Were Too Afraid or Embarrassed To Ask) and one half of the Twin Doctors for TwinDoctorsTV, tells Romper in an email interview, “I hate to be the bearer of bad news, but pumpkin ravioli will not induce labor. There have long been rumors and old wives' tales that anything pumpkin will induce labor — pumpkin spice lattes, pumpkin pie, pumpkin spice cookies, etc. Unfortunately for desperate moms-to-be, there is absolutely no science to back up the idea of pumpkin inducing labor. If it did, we would probably see a spike in babies born during the fall months.”

What about pasta in general? How would the Scalini's eggplant parmigiana work? Is it coincidence? "While pasta is high in carbs, there is nothing in pasta that will induce your labor. Some people have claimed that they went into labor after having a spicy pasta meal. In these situations, it was more likely the spice and not the pasta, but even in these cases, spicy food will only irritate the GI tract which can cause transient contractions in the uterus, but it will not induce labor," Abdur-Rahman says.

Truly, he tells Romper that are no foods that will induce labor — none that are scientifically proven anyway. However, Abdur-Rahman does say there are some non-food-related induction techniques you can try at home, as long as you're at least 39 weeks along.

Nipple stimulation — whether manual or with a breast pump — causes your brain to release the hormone oxytocin. "This hormone is the primary hormone that starts labor and an artificial form of this hormone is given when labor has to be induced," he says. Additionally, Abdur-Rahman suggests having "good old fashioned sex. If you're lucky, sex will lead to an orgasm, and an orgasm will cause the uterus to contract. Additionally, semen has a substance in it called prostaglandins. Prostaglandins prepare the cervix for labor (help it to soften, thin out and dilate) while also stimulating contractions."

Abdur-Rahman also suggests having a nice foot massage. "There are certain acupoints on the foot that can also stimulate uterine contractions and potentially labor. We always warn pregnant patients against having a foot massage until they reach at least 39 weeks gestation."

Looks like delicious pumpkin ravioli does not induce labor. Having sex and an orgasm, nipple stimulation, drinking raspberry leaf tea, and getting a foot massage can possibly help though. Just make sure you're 39 weeks before trying anything, and eat all the pumpkin ravioli you want. Just because.

More Like This
Everything You Need To Know About Missionary Sex During Pregnancy
30 Marvelous Baby Boy Names That Start With “M”
Can You Have Sex With Placenta Previa? Experts Explain
100 Pregnancy Milestone Instagram Captions For Every Memorable Moment