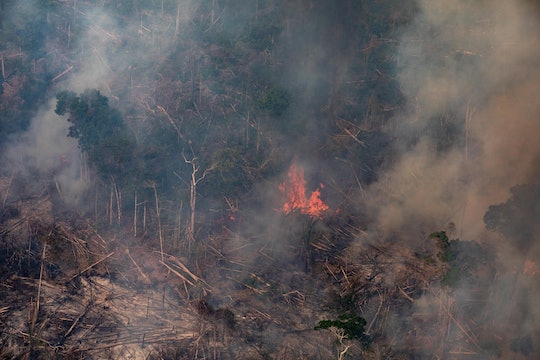 I remember the rainforest being a really big deal when I was in elementary school. In fact, we spent an entire week in the spring with a rainforest theme in every class we had, whether it was English or drama. Rainforest Cafes were everywhere, and the Natural Wonders store at the mall had a profitable business shilling rainforest-themed tee shirts and plush toys. "Save the Rainforest" bumper stickers were abundant in the wild '90s. But it seems to have fallen in popularity, and I wonder — what lessons are our kids learning about the rainforest, especially now that it is in real danger of being destroyed?

When I asked my 11-year-old son and 8-year-old daughter what they had been taught about the rainforest, I was expecting a long, gushing response about the Amazon, complete with an analysis of the film FernGully — the foundational film by which all '90s kids initially learned of the rainforest — but it wasn't so. My son told me that he hadn't learned anything about the rainforest in his six years of elementary school. "The only Amazon I heard about was the store," he told me. My daughter offered me a similarly grim response, saying that all she had learned was that the Amazonian rainforests were where toucans like Toucan Sam live when they were doing a project with Fruit Loops — and that he lived in the treetops and ate bugs from the bottom of the rainforest, not Fruit Loops. (This is very disappointing to her, by the way.)

I felt like I had failed. My children reckon the importance of a rainforest based upon the usage of their name in a retail mega-giant, and from the bird mascot of sugary cereal.

Doing a little digging, I spoke to some of my friends with children who are of similar ages, and I found pretty varied responses. But it's worth mentioning that none of the parents I spoke to said that their children's rainforest education came anywhere close to what millennials received. What most of us remember learning about is how so much of our oxygen, and so many medicines, animals, and plant life are found in the Amazonian jungle. Spread over nine countries and 2 million acres, the rainforest is responsible for absorbing a huge amount of the carbon dioxide produced on the earth, according to Harvard Scientists.

And the fires in the rainforest are close to the tipping point, noted those Harvard scientists. Soon, the lungs of the planet will be choking, and our children need to know why that's important.

So what are our kids actually learning about the rainforest? I spoke with Ontario teacher Amanda Blanchard of popular teaching Instagram account, The Cactus Class. She tells Romper that it can be incorporated into multiple classes, from science to language arts, and that how it is covered is dependent upon each school district's curriculum. For instance, I live in New York City, and we have a rigorous elementary science education program. That being said, the only text that I could find that was readily available regarding the rainforest is a four-minute video about rainforest diversity.

I placed a call to the office of communications at the New York City Department of Communications, and they tell Romper that each individual principal sets the curriculum for that school. Danielle Filson of the New York City Department of Education tells Romper, "We are focused on ensuring that the content, curriculum and environment our students are immersed in is relevant. Rainforests and ecosystem restoration are a part of our K-8 Science Scope and Sequence, as well as our new science core curriculum, which the majority of schools adopt." So it is possible that my children's school doesn't emphasize rainforest learning in a way that was particularly memorable for my children.

And that certainly seems to be the case, given the fact that some New York City Schools, like The Young Women’s Leadership School of Queens, has a vigorous, interactive learning project that surrounds the rainforest. Blanchard tells Romper that this sort of "inquiry-based learning" is an ideal way of learning a new topic like the rainforest. She would then move on and look at the lessons that she has that touch on the rainforest and the issues surrounding it, in a level that is appropriate for her third graders.

Educators are always concerned with what is appropriate for the students. Emma Stuart, a teacher from the educational content site for teachers, K-3 Teacher Resources, tells Romper that how you teach the rainforest is really important. She says that "When teaching kids about the rainforest, you start off with the types of plants and animals that can be found in the rainforest (depending on which rainforests you're focusing on)." After that, "as the students move into older grades, you start discussing things such as ecosystems, levels of the rainforest from the ground to the canopy, and how humans use the rainforest." Conservation and the state of the rainforest can ostensibly be threaded throughout that curriculum, depending on the age of the child, though it is up to each district or state to include that when they design the curriculum.

Perhaps that is why I expect that the way our children are going to learn about the rainforest will once again be shifting due to the place in which we find ourselves, and the real risk of losing it. Until then, we might consider renting FernGully on Amazon (irony of ironies) to get them started in their education.

More Like This
21 A+ Christmas Gifts For Teachers
Real Parents Share What Time They Let Their Kids Rip Into Gifts On Christmas Morning
Festive Mommy & Me Holiday Nail Ideas To Try
If Your Kids Love Their Elf, You Don't *Have* To Put Him Away On Christmas