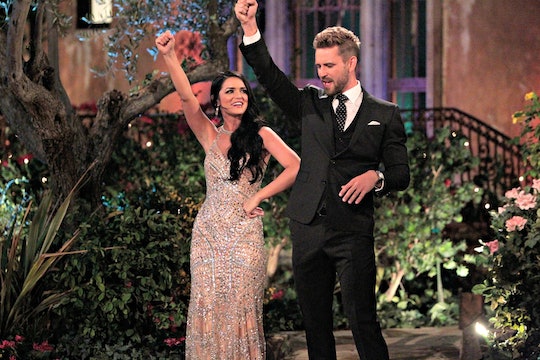 Raven Shared Something Big On ‘The Bachelor’

It wouldn't be the first time that the l-word came within the first few weeks of a season, but Raven told Nick she loves him on The Bachelor and it kind of came out of nowhere. In a way it did, because there wasn't anything monumental that happened for her to announce it. But it's also understandable, because they seem to have built a real connection. I shudder to overuse that word when describing Nick's relationships with each of these women, but that's really the best word. She wasn't shy about saying she loves Nick, though and he's said time and again how much he loves a woman with confidence, so she's definitely got that going for her, even if Nick thinks it's too soon for the l-word.

During Episode 5, Nick and Raven had their first one-on-one date in his hometown, during which she met his family and went roller skating with him. And, according to Raven, that is when she realized she was in love with him. During that date, she even confided in an interview that she was falling in love with him, so for viewers, her proclamation of love is no surprise, but Nick definitely seemed like he hadn't expected it just yet.

That's not to say that Raven said she loves Nick too soon or that he won't come to reciprocate her feelings, but it was still surprising, being that when she said it, they were in the middle of a group date. When she told Nick on Monday night's episode of The Bachelor she said in an interview that "Everytime I see nick, it's always so easy and comfortable and I feel like I can tell him anything and talk to him about anything."

The Arkansas business owner also said that it was on their roller skating date, when he sang The Little Mermaid's "Kiss The Girl" that she realized she loves him. To his credit, Nick accepted the news well, even if it was surprising to come now, while on a group date, and the fact that they do share some chemistry makes you wonder if he'll be able to realize his own strong feelings soon enough.

Raven just went with her heart and said what was on her mind and although Nick didn't say it back to her, he got all smiley and seemed to be happy to hear that from her, which is really all you can hope for at this point.