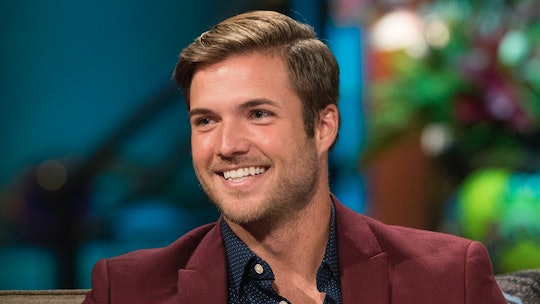 'Bachelor In Paradise' Fans Aren't Too Upset About Jordan & Christian

Every summer when Bachelor in Paradise rolls around, Chris Harrison promises fans that it will be the "most dramatic season yet." This time, he wasn't exaggerating, because two guys were sent home for fighting. Christian and Jordan's beach brawl will go down in the show's history and I can't wait to revisit it during the Season 6 reunion. But the reactions to Jordan and Christian being sent home on Bachelor in Paradise show how fans on Twitter see the silver lining.

In short, Christian going home means Clay has another shot at making Nicole fall for him. And regardless of what you think of Clay and his compatibility with Nicole, the fight definitely worked in his favor. Before, Clay and Christian both had hopes of getting close to Nicole. She cozied up to Clay for a while before Christian arrived in Paradise ready to woo her and she gave him a chance.

When she came back from their date, she was a smitten kitten and torn between her feelings for both men, who are exponentially different from one another. Jordan didn't like the way Christian was throwing his budding relationship with Nicole in Clay's face and took it upon himself to defend his friend. Things went from bad to worse when the altercation turned into a fight, which got out of hand and led to both Christian and Jordan's expulsion from Bachelor in Paradise.

Clay is still sitting pretty and, in Nicole's eyes, he looks like a nice uncomplicated alternative to the guy she had heart eyes for yesterday.

Nicole was already on the fence about Clay and Christian before Christian's fight with Jordan turned into body slams and rolling around in the sand. She saw the value in continuing her relationship with Clay, who is your typical nice guy and who has shown genuine interest in her alone.

On the other hand, she felt an unmistakable pull to Christian. Whether or not she was going to pick either of them to receive her rose Monday night, Christian going home made the decision a little easier on her.

What originally set Jordan off was seeing Christian give Nicole a piñata as a gift while Clay looked on, seemingly heartbroken. This was too much for Jordan and he charged onto the beach, ready to confront Christian on behalf of his friend. What started as a passionate argument soon snowballed into something worse and it wasn't a good move for Jordan. Luckily for Clay, it helped bring Nicole closer to him and fans on Twitter saw that.

Even though Jordan and Christian both had a role in their fight on the beach, there was the small chance that both men wouldn't be sent home. Bachelor in Paradise is all about drama and Christian had already brought plenty with him in the short time he was on the show. But Chris Harrison declared that the show has a "no tolerance policy" on violence, so when Jordan started the fight, both men were doomed to be sent packing, regardless of who won.

If Christian hadn't been sent home along with Jordan, Clay's season might have been a lot shorter. Without Christian there to feed into Nicole's conflicted feelings about the two men, she gave Clay her rose and they got a little closer. She said the fight helped show her who Christian really is and she was happy with her decision to pursue Clay.

It's still hard to say where Clay and Nicole go from here or if they will even last through the next couple of rounds of cast member arrivals. But thanks to Christian and Jordan being sent home on Bachelor in Paradise, Clay was given the second chance he needed.