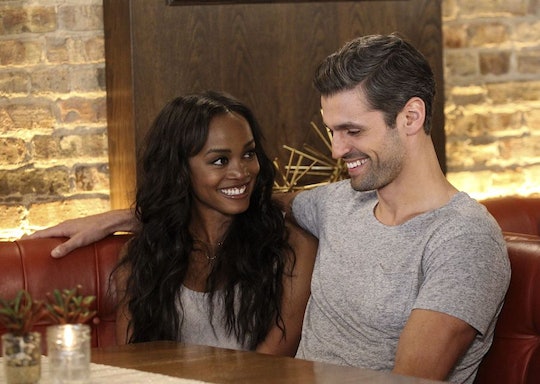 Fans Fell Head Over Heels For Shirtless Peter On 'The Bachelorette'

There's never been a question that Rachel chose some great looking men for her final three, but the reactions to shirtless Peter on The Bachelorette prove that it's something fans have needed all along. He's been a top contender since he revealed himself to be a down to earth and all-around good guy earlier this season, so when he was shown shirtless and barefoot the morning after his fantasy suite date with Rachel, it was kind of everything and Twitter was HERE for it.

Even if we might have seen Peter shirtless in a hot tub before The Bachelorette finale's fantasy suite date, it was still like seeing a whole other side of him. Unlike Bryan, Peter hasn't been big about regular makeout sessions and we've seen a romantic side of him, but not necessarily a passionate aspect of his personality.

So seeing Peter shirtless on The Bachelorette, and making breakfast for Rachel no less, was not only a treat for fans, but it gave viewers another glimpse into another part that Rachel obviously saw in him to keep him in the running this long. Peter's not the only guy who got a fantasy suite date with Rachel, but as he said himself the morning after, it helped him feel like he and Rachel were a real couple and as they stood in the kitchenette of their suite, they definitely looked like a legitimate couple.

Even though Peter still had a difficult time getting to Rachel's level of wanting to be engaged and married sooner rather than later, I think we all forgave him for it when he decided to be shirtless on The Bachelorette season finale.

In a way, seeing Bryan shirtless was to be expected, since he's become known for his chemistry with Rachel. Peter, on the other hand, has been the romantic option for her. Like, if this was a romantic comedy, Bryan would be the hunky boyfriend and Peter would be the good looking boy next door best friend who's just biding his time until she notices him. But you know, with pecs and biceps to get noticed right away.

Obviously being physically fit doesn't make you husband material, but the reactions to a shirtless Peter on The Bachelorette finale prove that seeing him in that light was something fans loved regardless.

There was never any question that Peter was a strong competitor as far as looks go, but just in case Bachelorette viewers had any doubts, he definitely proved them wrong.