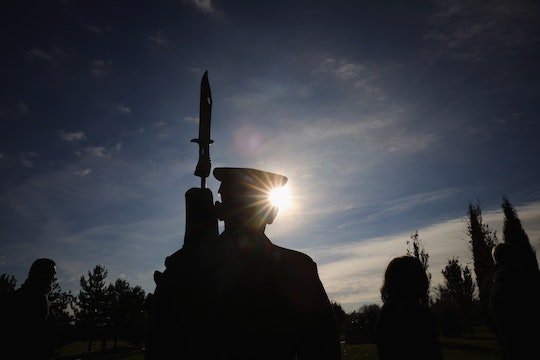 On the day of his inauguration, President Donald Trump made good on his promise to crackdown on immigration. He's signed a number of executive orders that have allowed U.S. Immigration and Custom Enforcement to coordinate a series of nationwide raids that have terrified and terrorized immigrant communities. Now it seems his enforcement policies could escalate — just read the National Guard mobilization memo published Friday by the Associate Press. (Here's where you can read it.)

The 11-page memo, allegedly written by U.S. Department of Homeland Security Secretary John Kelly, proposes that the Trump Administration mobilize 100,000 National Guard troops to round up undocumented immigrants in 11 states, according to the Chicago Tribune. The document, dated Jan. 25, was meant to serve an addendum to Trump's Jan. 20 executive order ramping up the detention and deportation of undocumented immigrants, the paper reported. It was addressed to ICE and U.S. Customs and Border Protection officials.

The White House, though, has denied the existence of the 11-page memo from Kelly. According to Bloomberg Politics, White House Press Secretary Sean Spicer called the report from AP "100 percent not true." Spicer, who initially denied AP's claim of the report on Thursday, said,

There is no effort to do what is potentially suggested ... no effort at all to utilize the National Guard to round up unauthorized immigrants.

After Spicer's remarks, the AP scanned and published the memo in full.

So by what law could the Trump Administration make this happen? Kelly cited Section 287(g) of the Immigration and Nationality Act, which gives the head of DHS the power to deputize other government officials. Traditionally, as Vox reported Friday, presidents have used "287(g) agreements" to allow local law enforcement to help with immigration raids and arrests. So it would be an unprecedented move on Trump's behalf if he were to use Section 287(g) to deputize National Guard members, thus militarizing immigration enforcement.

Under Kelly's proposal, National Guard members would be authorized to "perform the functions of an immigration officer" in states along the Mexico border, as well as "adjoining" states. According to AP, those states would include California, Arizona, New Mexico, and Texas, along with Oregon, Nevada, Utah, Colorado, Oklahoma, Arkansas, and Louisiana. The governors of those states would have the power to opt out of participation in the National Guard mobilization effort.

The Department of Homeland Security did weigh the proposed policies laid out in the memo, but ultimately rejected them, according to Vox. Vox noted that the memo obtained by the Associated Press matches the contents of a document leaked to the digital news site. And that memo "appears to still be under consideration in some form," according to Vox.

A DHS official described the memo a "very early, pre-decisional draft" that was "never seriously considered" by the agency, according to a tweet by journalist Dorey Scheimer. Scheimer also posted a response from Lynn Kirby, spokesperson for the Nation Guard Bureau, who said the organization knows about the media reports but it has "received no official notification to execute any activations at this time."

If the Trump Administration were to militarize immigration enforcement, it would have set a horrifying precedent for this country. Mobilizing the National Guard to carry out the severe enforcement policies for the federal government would effectively turn the United States into an unyielding police state. And that presents a danger for everyone.