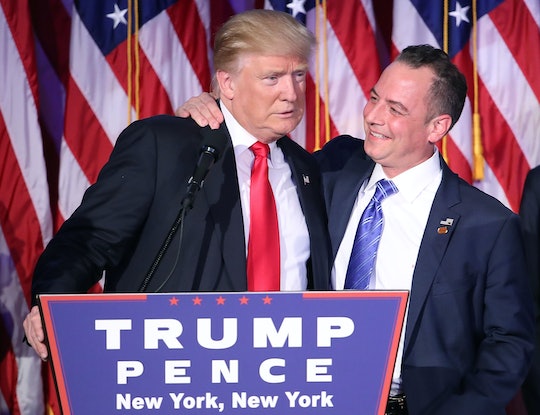 Throughout the campaign season, Donald Trump repeatedly asserted, as he slumped in the polls, that the election would be "rigged" against him, and even notably stated that he'd keep the country "in suspense," instead of promising to accept the results of the election at a debate with his opponent, Hillary Clinton. Clinton, of course, denounced Trump's careless statements as threats to American democracy and the peaceful transfers of power that are among its hallmarks. Now, with Green Party candidate Jill Stein pledging to fund a recount of the ballots in three decisive states that unexpectedly propelled Trump to victory, the new president-elect's chief of staff is calling foul — and missing one crucial point. In a Fox News Sunday interview, Trump's newly-selected White House Chief of Staff Reince Priebus specifically called the recount "hypocritical," blasting Clinton without considering how her actions diverge from the behavior she previously rebuked.

"It is a total and complete hypocritical joke that the group of people that thought that they were nervous about President-elect Trump not conceding are the people that are conducting recounts in states where we won by over 68,000 votes," Priebus, the former Republican National Committee, said on the program, referring to the Clinton team's recent announcement that it would participate in — not orchestrate — the recount in Wisconsin, which has been initiated, as well as those in Pennsylvania and Michigan, if Stein upholds her pledge to pay for recount efforts in those states too.

Stein's push to raise the money required to trigger a recount in Wisconsin and Pennsylvania, states Trump won by relatively narrow margins, and Michigan, which is still too close too call nearly three weeks post-election, stemmed from a New York Magazine report last week that a group of computer scientists and election lawyers was urging Clinton's team to contest the results because reported irregularities in the returns could indicate that votes could have been manipulated or hacked.

Clinton, though, had already conceded to Trump and confirmed her belief that all Americans should accept the election results. Having conducted its own extensive, independent review of whether outside interference had influenced the election results in any way, as the campaign's lawyer, Marc Elias, wrote in a Medium post Saturday, the team is now cooperating with recount efforts because it's already in motion:

Because we had not uncovered any actionable evidence of hacking or outside attempts to alter the voting technology, we had not planned to exercise this option ourselves, but now that a recount has been initiated in Wisconsin, we intend to participate in order to ensure the process proceeds in a manner that is fair to all sides ... But regardless of the potential to change the outcome in any of the states, we feel it is important, on principle, to ensure our campaign is legally represented in any court proceedings and represented on the ground in order to monitor the recount process itself.

Clearly, Clinton and her team are not out to disrupt the election process, especially because it's incredibly unlikely that the investigation Stein is advocating for could alter the results and even the Obama administration is steadfast in the belief that hackers did not change the outcome of the election. Still, Priebus slammed the recount in general, and Clinton's participation in particular, as a means to "divide this country when we need to come together," and "a total and complete distraction and a fraud." But to accuse Clinton herself of plotting to either divide or distract is an unfair mischaracterization, because she's not the one who initiated the effort. (RNC representatives for Priebus did not immediately respond to Romper's request for comment on Trump's own past statements, as well as the recent recount.)

Trump, on the other hand, stoked a distrust for the media by asserting again and again and again that the democratic process is unjust, working to sow doubt — and, likely, discord, if he had lost — among constituencies that supported him. A Trump defeat coupled with his refusal to say beforehand that he would accept the results of the election could have inspired his followers to turn violent, as he has fostered in them the deeply held conviction that established channels for judging elections and even contesting them are tilted against them — that is, until their guy won.

Now, Trump is content to admonish Clinton on Twitter for her team's desire to ensure that a already-in-motion process that centers around the former Democratic candidate operates in a way that best represents their interests. There's certainly some hypocrisy in Trump's tweeting that the idea of a recount is a "scam," when he all but promised to fight the election results if he were to lose. Now, Clinton has actually refrained from doing that until a third party intervened — and, and that point, the campaign certainly does owe it to her supporters to at least recognize the process.

After all, if it were to flip the election, that wouldn't necessarily even be the craziest thing to happen in 2016.