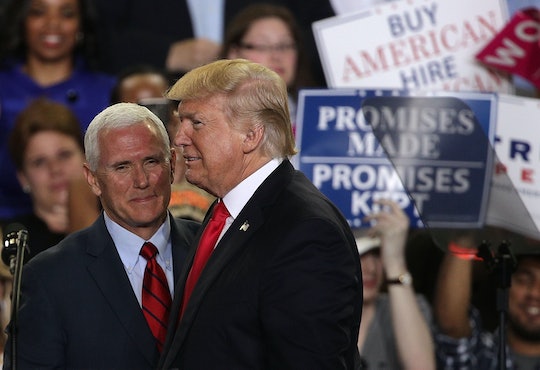 Here's How Many People Will Lose Insurance If Obamacare's Repealed

According to a new non-partisan Congressional Budget Office report, repealing Obamacare might leave 23 million people uninsured. That is not good news for the Republican administration, since President Trump promised Americans that the American Health Care Act would be better than the Affordable Care Act for people. Back in January, Trump told The Washington Post, “We’re going to have insurance for everybody."

The new analysis from the CBO of the revised AHCA, which passed in the House of Representatives earlier this month, is very similar to the 24 million people the CBO estimated would lose care under the previous version of AHCA, which was rejected by the House in March. This new estimate is a sign that getting a version of the AHCA through the Senate will be a little more complicated than some GOP members expected.

It could go either way. Because of the huge cuts to Medicaid funding, the CBO also estimates that the AHCA would cut the deficit in half by 2019, which means that it would meet the budget requirements the bill would have to meet in the Senate. But Democrats will not be happy that those savings comes at the cost of Americans losing their healthcare, which is why they (and many moderate Republicans) rejected the AHCA the first time.

Then again, back in March, the CBO estimated 24 million people would lose coverage if Trumpcare was passed and that the plan would cut the deficit by $150 billion. If that didn't convince the Democrats in March, it's not likely they'll take 23 million uninsured and a deficit cut by just $119 billion. Even if lawmakers don't think that health care is a right, they have to know that it's politically very unpopular to take benefits away from people after they've enjoyed them.

The CBO also concluded in their report that insurance premiums for individuals (so, not employee group plans) would actually go down, which is a sticking point for many Obamacare opponents. But that would be, "in part because the insurance, on average, would pay for a smaller proportion of health care costs." The CBO added:

In addition, the agencies expect that some people would use the tax credits authorized by the act to purchase policies that would not cover major medical risks and that are not counted as insurance in this cost estimate.

That the reports are similar for both versions of the bill is a sign that Republicans probably should have waited for a CBO report before voting. The Senate is currently writing a version of the AHCA that they intend to pass, but with these new numbers, repealing Obamacare is going to be much harder than they originally thought it would be.