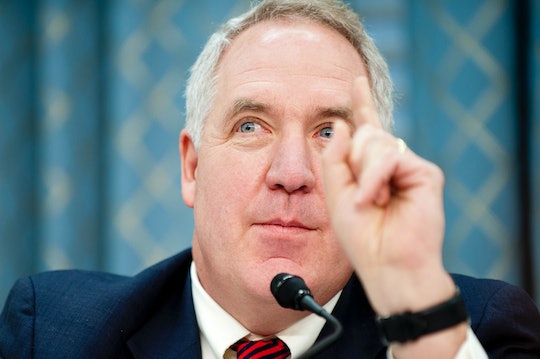 As the new Trump administration seeks to dismantle the Affordable Care Act, Democratic and GOP lawmakers were in Congress on Thursday debating the potential benefits of a new healthcare system. Two Congressmen in particular, GOP Rep. John Shimkus from Illinois and Dem. Rep. Mike Doyle of Pennsylvania, at one point became engaged in a heated debate about the elements of Obamacare Americans appeared to enjoy. As they volleyed back and forth, the Republican congressman mentioned that men shouldn't pay for prenatal care, leaving both Doyle and many others shell-shocked. (I suppose because men can't get pregnant, right? Is that why?)

During the debate over the new GOP bill, which is called the American Health Care Act (unofficially dubbed "Trumpcare"), Doyle asked the GOP congressmen about "what mandate in the Obamacare bill" he took issue with. He went on to outline some popular options with Americans including "pre-existing conditions, caps on benefits," and "letting your child stay on the policy until 26." It was at that point that Shimkus interrupted with his answer. "What about men having to purchase prenatal care?" he asked.

His response appeared to fluster Doyle, who stumbled over his words. Shimkus reiterated, "Well, should they?" as though it was a universally-accepted concept that men should not be held financially responsible for babies growing inside women. Even if they put them there, or, you know, were once the fetal recipients of such care themselves. (And as many pro-choice advocates also argued, whatever happened to caring about babies?)

Rep. Shimkus, a senior member of the House Energy and Commerce Committee, has been an avid opponent of Planned Parenthood and an advocate for the anti-choice movement throughout his political career. Which means that Shimkus will fight tooth and nail against a woman's right to choose, while defiantly defending a man's right to opt out if he so chooses.

Shimkus could very well get his wish for men to avoid paying for prenatal care in the near future. After many hours in Congress, the American Health Care Act was advanced 23-16 from the House subcommittee, meaning that the first hurdle in the Republican's quest to dismantle Obamacare and replace it with Trumpcare was crossed. Prenatal care was one of many provisions to be discontinued in the American Health Care Act. Under Obamacare, men were expected to pay for prenatal care along with women. This meant that, before the ACA came about, women paid on average $1 billion more than men each year for the same health insurance benefits.

Back in 2013, an anonymous man asked Consumer Reports why he should have to pay for maternity care if he was childless. Insurance expert Nancy Metcalf's answer holds as true today as it did then:

Health insurance, like all insurance, works by pooling risks. The healthy subsidize the sick, who could be somebody else this year and you next year. Those risks include any kind of health care a person might need from birth to death—prenatal care through hospice. No individual is likely to need all of it, but we will all need some of it eventually.

So, as a middle-aged childless man you resent having to pay for maternity care or kids' dental care. Shouldn't turnabout be fair play? Shouldn't pregnant women and kids be able to say, "Fine, but in that case why should we have to pay for your Viagra, or prostate cancer tests, or the heart attack and high blood pressure you are many times more likely to suffer from than we are?" Once you start down that road, it's hard to know where to stop. If you slice and dice risks, eventually you don't have a risk pool at all, and the whole idea of insurance falls apart.

Despite the fact that men may not want to pay for prenatal insurance, Doyle was correct when he later stated that health care was not an "a la carte system," where men could pick and choose which parts of healthcare they were willing to foot — no matter how they might feel.