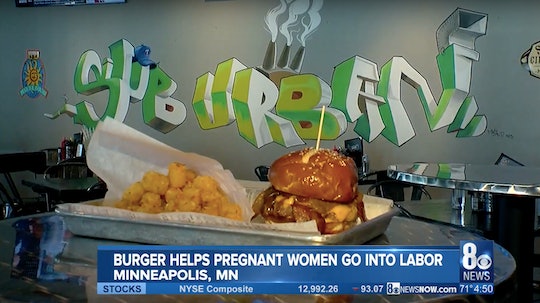 As a mom of three, I honestly thought I'd heard of everything when it came to labor induction. From pinky-toe acupuncture to the infamous salad where the dressing's secret balsamic base is said to do the trick, I was certain I'd heard of all the labor-bringing-on secrets. But, lo and behold, there's a new invention. Yup, one restaurant's "Labor Inducer" burger undoubtedly has exhausted (and hungry) moms-to-be curious about whether this tasty dish can do the trick.

Earlier this year, Cindy Berset, co-owner of The Suburban restaurant in Excelsior, Minnesota, created a new, spicy burger recipe to enter the eatery in a local hamburger competition, according to the Lakeshore Weekly News. And two expectant mamas have gone into labor shortly after eating the yummy creation.

Berset's daughter, Kelsey Quarberg, was the first mom-to-be to try it. Quarberg, also a co-owner of the restaurant and pregnant at the time, tried the burger ahead of the Twin Cities Burger Battle. Shortly after, she went into labor, eight days before her due date, welcomed her first baby, Samuel, hours later. "She ate the entire thing and at midnight went into labor," Berset told CBS News affiliate WREG-TV.

Quarberg and Berset started thinking they might have more than just a new yummy menu item on their hands and dubbed the new dish "The Labor Inducer." The burger features an Angus beef patty smothered with American cheese and honey bacon, topped off with a pretzel bun. And, of course, the spicy factor. "We've got Cajun spice, a Bavarian spicy brown mustard on it,” Berset told ABC News affiliate WWSB.

Recently, a customer named Katy Engler, who was about-to-pop pregnant at the time, saw the dish featured as the "Burger of the Month," and decided to try it out. "It was my due date. I was very done being pregnant," Engler told CBS News affiliate WCCO. "If I don’t [order it] it’s like me telling the universe, ‘I don’t need your help,’ and I did."

And voilà — Engler went into labor and her daughter, Elise, was born hours later, according to WCCO, resulting in the restaurant putting a "baby counter" sign on the wall.

With a success rate so far of two for two, word is getting out, and Berset thinks the secret might be in some of the particular ingredients. "I've heard that some spicy foods might trigger it," Berset said, according to KFOR. Although it seems to have worked for these two mamas, the Cleveland Clinic notes that there's actually "no evidence that spicy food can trigger labor."

Still, whatever led to these women going into labor after eating the burger, it sounds delicious, even if there's "no known food that has the potential to get women’s contractions going," as Pregnancy Magazine explained. But, hey, it doesn't hurt to try right?

And fortunately, other midwest moms-to-be can have to chance to do so. In a Facebook post shared on the restaurant's page on Sept. 6, The Suburban wrote that baby Sam and baby Elise "are hopefully the first of many more 'Suburban Tots' when we add the burger to our permanent menu."

Trying certain foods to kickstart labor isn't a new idea, of course. Celebs like Hillary Duff and Jade Roper have tried an infamous "pregnancy salad" from a Los Angeles cafe to help induce labor. There's also an eggplant parmesan recipe that's said to have led to at least a thousand "eggplant babies" being born after their moms ate the Italian dish, according to Bon Appetit.

While, unfortunately, research doesn't point to a burger like "The Labor Inducer" actually triggering laboring, moms-to-be can still enjoy a delicious meal and hope it does the trick.