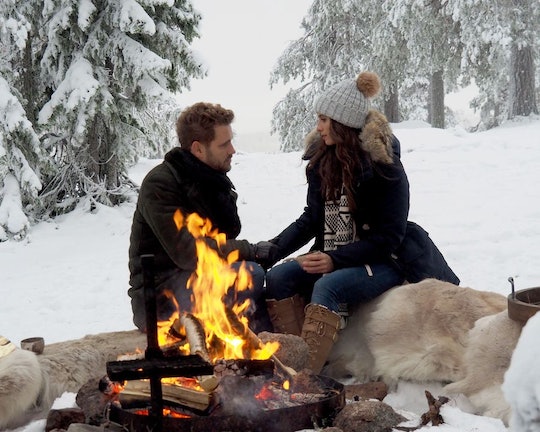 These 'Bachelor' Santa Memes Are Everything

For their final date before Nick makes the big decision of proposing to one of the final two women, Nick and Vanessa met Santa and the Santa memes and tweets from The Bachelor show how much everyone loved it. While it could have been totally corny, it was actually pretty cute. It was, after all, the final last ditch effort date for Vanessa to hopefully cement her feelings for Nick before the big proposal of the season. And, as to be expected, Twitter was obsessed with the date that Nick was sure would make Vanessa think of her childhood.

What's better than a date in Finland in the winter that also includes hiking through the snow to a remote cabin to meet Santa? If the Bachelor finale has to take place in a cold and snowy locale, then bringing in the big guy with the white beard is almost expected. Nick and Vanessa then got to go inside of the cabin and talk to Saint Nick about their Christmas wishes and (surprise) Nick's big Christmas wish was to find love, as was Vanessa's. But also chocolate.

I don't know how romantic a date that involves Santa is supposed to be, but since The Bachelor wrapped filming around that time of year, it was totally appropriate. And even though right now we're all over Christmas, Twitter pretty much loved everything about Nick and Vanessa's last date.

It is kind of hard to remember that The Bachelor has been done filming for a while and that everything viewers have watched this season took place over the colder months. Still, seeing Santa show up made a lot of viewers stop for a second and go "Uhh, what?"

Watching Nick and Vanessa's Santa date on The Bachelor season finale also had fans wondering if Santa was part of the "historic" night that Chris Harrison was promising fans all evening. I mean, OK, Santa isn't a huge surprise, but it was still a cute date that people kind of loved.

I'm not sure if Vanessa ever specifically mentioned a love of Santa or Christmas, but apparently Nick thought meeting Santa at his cabin in the woods would be the most romantic option for their final date on The Bachelor. To be fair though, she did seem extremely excited, as though she thought he was the real thing. Or, you know, that there is such a thing.

One of the best memes about Santa on The Bachelor though was the one that once again predicted what the big Bachelor surprise would be this season, with Santa becoming the next Bachelor.

LOL. Nick and Vanessa's Santa date on The Bachelor was silly and cute and probably what they needed as a couple given that a lot of their conversations had been pretty heavy lately. And, on the plus side, it was also apparently what viewers needed for the Bachelor couple.