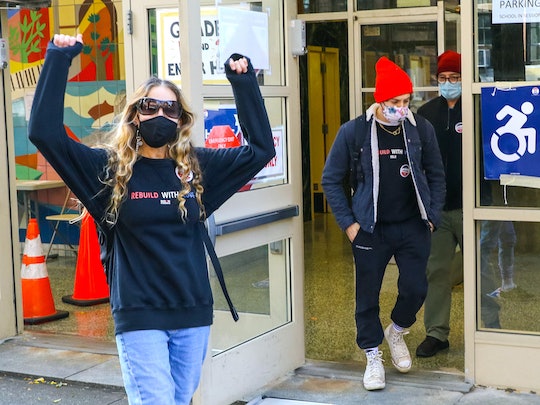 First steps, first lost tooth, first heartbreak... these are some of the moments that will hit parents, as they say, right in the feels. Another first that can make a mom feel all sorts of proud? The first time your child votes. As evidenced by photos of Sarah Jessica Parker taking her son to vote in his first presidential election, the Sex and the City star was beaming with pride on Tuesday after he cast his ballot.

On Nov. 3, Parker and her husband, Matthew Broderick, were captured walking out of a polling site in New York City with their 18-year-old son, James Wilkie, with each of them wearing "I Voted" stickers. All three were masked up and wearing matching navy blue, long sleeve shirts that read, "Rebuild With Love #BidenHarris," sharing their support for the Democratic presidential nominee Joe Biden and his running mate, Sen. Kamala Harris.

The 55-year-old actress star held up her arms in a victory stance for photographers. Needless to say, Carrie Bradshaw was one proud mom on Tuesday. Parker's son turned 18 last week, a milestone she commemorated with a touching post and throwback photos on Instagram.

"October 28th, 2020," she captioned the post. "On this day, you are 18 years old. I marvel at the passing of those years but equally the young man you are becoming. My love for you is an ache and an honor. As you leap toward and into your future, I remain your privileged and steadfast confident and joyful witness to the year ahead. Happy birthday my first time voter. I love you so."

Another snapshot showed Parker and Broderick waiting in line to vote, which also showed Parker's Biden-Harris socks. Long before Election Day, the Hocus Pocus star has been very vocal about her political support and beliefs.

"Tuesday, November 3rd, 2020 I will be voting with pride for Joe Biden and Kamala Harris and in support of Dignity," she shared in a lengthy Instagram post on Nov. 2. "Character, grace, respect, equity, stability, choice, my daughters, the Constitution, immigrants, affordable health care that protects pre-existing conditions."

Parker and Broderick are also parents to 11-year-old twin daughters, Tabitha and Marion. When it comes to parenting, Parker has said she tries to keep them humble. "Parents who aren’t well-known can have children who aren’t grounded because of the example set in their home," she shared during a radio interview last year with Australian model Rebecca Judd. It's a bit of parenting wisdom the actress says she picked up from country superstar, Dolly Parton, who once said she would give her family "what they need rather than what they want."

"I will do my best to make sure you always have what you need, but I want you pining towards something," Parker said in the interview. "I want you to work for something, to dream of it, to will it to happen."