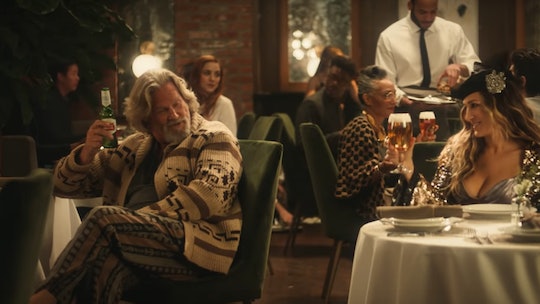 The Super Bowl is merely days away, which means a few things: You and your friends can snack on as many tortilla chips as you please, everyone is going to do everything they can to make sure the Patriots don't dominate again (kidding, kind of) and most of all, we all get to enjoy the most exciting part... the commercials! The best ads during the big game are the ones that tap into the pop culture zeitgeist in a way that gets audiences super pumped, and Sarah Jessica Parker's Super Bowl commercial will do just that for Sex and the City fans. (Not to mention fans of The Big Lebowski.)

That's right: Carrie Bradshaw is back, people, albeit for only a few seconds of time. In a Super Bowl commercial for beer company Stella Artois, according to Eater, Parker will reprise her iconic role alongside Jeff Bridges (who'll also be reprising one of his iconic roles — The Dude in The Big Lebowski).

The ad reportedly begins with Parker — dressed as the one and only Bradshaw — entering and sitting down at a restaurant, as the Sex and the City theme plays. A waiter asks her if she wants a Cosmopolitan (anyone who watched the show knows the drink was a staple prop for the character, next to Manolo Blahniks). Surprisingly, she declines; she'll be drinking Stella Artois, she says. The restaurant erupts in chaos.

The camera pans over to the other side of the restaurant, where Bridges walks in dressed as The Dude to Bob Dylan's "The Man in Me." The bartender asks him if he wants a White Russian (The Dude's signature drink, like Bradshaw's Cosmo) but he declines in favor of... you guessed it! A Stella Artois. The Dude sits down next to Bradshaw, who says: "Good choice." He replies, “Changing can do a little good.”

The message is clear: If Carrie and The Dude changed their beverage habits for a Stella, why wouldn't you? Of course, it's been years since fans have seen Bradshaw on screen, and hopes were dashed last year that it would ever happen again as The Hollywood Reporter noted talk of a Sex and the City 4 ended because actress Kim Cattrall didn't want to be involved.

Despite this, Parker has talked about where she imagines Bradshaw would be in real life, at this point.

“Well, my guess is that she and Big are New Yorkers and still involved,” she told E! News of her character. “I’m sure she’s still writing. I’m sure she has a lot to write about given what’s happened in this country over the last year and a half, two years, politically, socially. I think she would be deeply engaged in those conversations.”

Sadly, audiences will never know. Back in 2017, Parker told Extra "It's over… we're not doing it," regarding the final movie of the series. It was a big moment, considering that it meant the world would see no more of Carrie, Miranda, Charlotte and Samantha. However, it's amazing that Parker found another way to bring back her role, however briefly.

So if football isn't exactly your thing, you still have something incredible to look forward to this weekend: not only another funny, entertaining commercial, but a very brief glimpse of a couple of characters that we've all come to love so much.