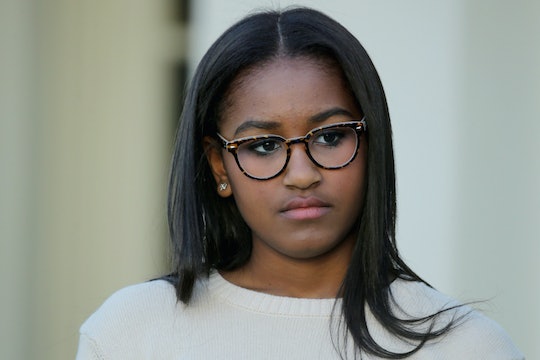 Summer is just around the corner, which means teens everywhere are heading off to prom. Even famous kids are getting in on the fun, like Sasha Obama, who went to the prom and is now dominating the Internet with pics from her big night. The youngest Obama daughter opted for a subtle, but beautiful, look, and fans cannot get enough of how sophisticated she looked.

The 17-year-old former first daughter went to the Sidwell Friends High School prom on Friday, according to the Daily Mail. She was photographed posing in a black dress with a high slit up the thigh alongside boyfriend Chris Milton, who sported a classic black tuxedo at the pre-prom party attended by members of both teens' families. Michelle Obama and Malia Obama were both photographed smiling with Sasha.

Former President Barack Obama wasn't at the party, which the Daily Mail suggested was lucky for Milton as Barack reportedly has a habit of hassling his daughters' boyfriends. The former 44th President of the United States previously joked about prospective suitors pursuing daughters Sasha and Malia during the 2010 White House Association Dinner. At the time, he joked that boys should be careful how they behave with his daughters, joking about having access to drones.

"Don't get any ideas, boys," he said during the event. "I have two words for you: Predator Drones."

Photos from Sasha's prom circulated on Twitter, gaining traction after a user claiming to be Milton's older cousin posted them online. After going viral, however, the tweet was deleted, according to Page Six. Although the original tweet has been removed from the platform, others are still making their rounds online with fans celebrating her. Others joked about how nervous her date must have been with Secret Service eyeing him the whole time.

"Man Sasha Obama grew right in front of our eyes," another tweeted.

Awww, she really is like our country's baby sister!

"My favorite part about Sasha Obama's prom pics is the casual Secret Service Agent in the background," another fan joked on Twitter.

Prom is just one of the major milestones Sasha has coming up this year. In June, she'll graduate high school and then head off to college in the fall. According to a report from Fox News, she plans to attend the University of Michigan. In December, an Instagram account believed to belong to Sasha published a post about how excited she was to attend the popular college. The post included a photo of the school's football stadium.

"So proud to say I'm going to college with my sisters!" she reportedly captioned the post, according to Page Six.

This is an exhilarating time for Sasha, and fans are loving seeing her enjoy ever second of it. It's unclear if she had fun at prom, but her supporters are hopeful. (Prom is traditionally a whirlwind of emotions under the best of circumstances, as you likely remember.) The Obamas haven't yet confirmed what's next for the youngest of their two daughters, but she's surely got a bright future ahead.