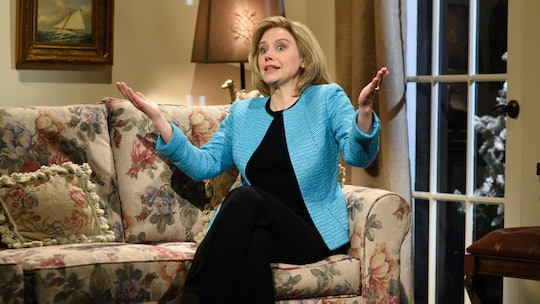 You don't run for president without the added consequence of becoming the butt of all kinds of jokes. So when the Saturday Night Live cold open debate aired on the SNL season premiere Saturday night, it was expected, but also not so much in some ways. We couldn't have asked for a better Donald Trump in Alex Baldwin or a more satisfying Hillary Clinton in Kate McKinnon, who's become the resident Clinton impersonator on SNL. And Twitter reacted to the debate on SNL exactly as you'd expect them to. Opinions, praises, and cringes abounded.

The cold open on SNL was almost as good and monumental as the real thing. Mostly because it made it even more acceptable to laugh at it all, but also because of the on point lines delivered by McKinnon and Baldwin. If it wasn't enough that Baldwin got the Trump voice down to a scary accurate level, he also succeeded in the mannerisms, bushy eyebrow raises, and orange tan. McKinnon's Clinton gave the kind of responses you've already heard from the real deal, but delivered in the realistic way that only McKinnon knows how to do.

McKinnon's closing statement involved telling the American people that if she isn't elected, she'll keep running for president until she dies, and most Clinton supporters can attest to the real life determination of the presidential candidate. But, as much as we all love McKinnon and pretty much everything she does, including her Clinton, Twitter loves Alec Baldwin as Trump on SNL.

Basically, somehow there's nothing wrong that can be said about Baldwin as Trump on the SNL cold open debate and, should we need a Trump again on SNL, there is no better guy for the job. Darrell Hammond has famously portrayed Trump on SNL in the past, but Baldwin slipped in and found in himself an inner Trump that was legit.

You kind of expected to see the presidential candidates exaggerated, as SNL tends to do when we've got an important election fast approaching. But it's also what we all need to stay hopeful and optimistic about the presidential race. Twitter recognized the good, the bad, and the awful when it came to the SNL cold open debate and it's exactly what we all needed. But more than that, apparently Baldwin was the Trump we always needed, even if we didn't know it.