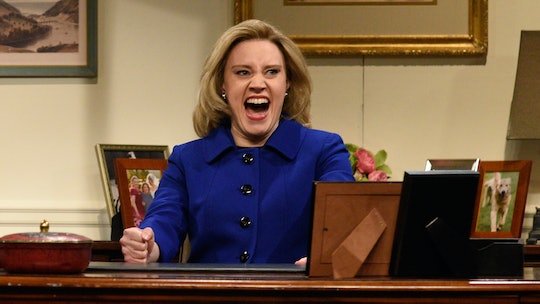 Where To Rewatch The 'SNL' Cold Open, Because You're Going To Want To See This Fake Debate

Saturday Night Live wouldn't be the same without some well-placed and intelligently written political jokes, especially around the time of the much-anticipated but also feared presidential election. So obviously the cold open for the season premiere of SNL is going to feature a faux debate between Hillary Clinton and Donald Trump but even if you catch it live, you're likely going to be wondering where to re-watch the SNL cold open. Not only are we going to get Kate McKinnon as Clinton, as per usual, but were getting Alec Baldwin to bring out those comedic chops we loved him for on 30 Rock as he plays Trump, eyebrows and all.

Luckily, re-watching the SNL cold open and the episode itself aren't super hard, since this is the age of everything digital and everyone wanting the ability to share the best moments on social media. While you would be doing yourself and your country a disservice by missing the Season 42 premiere of SNL (OK, probably not your country, but you get it), some people do need to catch the show after the fact or would rather grab the highlights than sift through all of the sketches they would have been ignoring at the time anyway.

So, how can you re-watch the SNL cold open? Not surprisingly, you'll be able to find it in a couple of different places the day after it airs. So use your lazy Sunday to enjoy McKinnon slaying and Baldwin being the only Trump we'll ever need.

Like most SNL highlights, the show's official YouTube channel will feature the cold open the day after. Probably along with some skits from the show, but most importantly, you'll be able to catch the cold open would-be debate. You won't typically find entire episode uploads on YouTube, but you will find the highlights, along with the cold open, which is what always sets up the show.

But if you're of the Hulu camp, then you can fire up the streaming service the next day and watch SNL's cold open that way. In this case, you might be able to find the entire episode to re-watch, but if you're just looking to re-watch the SNL cold open, you can also find clips on Hulu that might made the task a little easier. You can also re-watch the episode in its entirety on the website, if that's what you're going for.

McKinnon has become known for her comedic genius in pretty much every role she plays on SNL, but as Clinton, she's become known for that role in particular and even shared a scene with the presidential candidate herself on the show. She even recently won an Emmy, thanks in part to her portrayal of the candidate, so it's hard not to love McKinnon in the role that she has really made her own.

McKinnon and Baldwin will be featured in SNL's cold open on the season premiere Saturday night, playing Clinton and Trump, respectively, in a debate that will likely mirror the one that just occurred in real life. And it's totally OK to be more excited about that than any real debate.