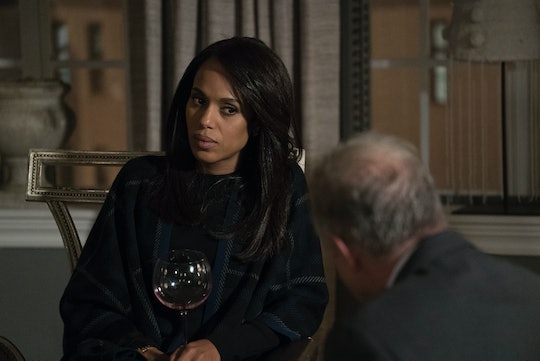 Since each season of Scandal is written and filmed while the episodes are still airing on TV, you have to assume that at times, inspiration is drawn from real life events. So when Scandal tackled sexual harassment in the workplace, it was an obvious nod to the important real life #MeToo movement. In 2017, celebrities and then literally everyone else affected by sexual assault in the workplace or in general began supporting the cause on social media of bringing awareness to the alleged sexual misconduct they endured and it wasn't long before the movement took off in a very big way.

Likewise on Scandal Thursday night in an episode appropriately titled "The List," it was revealed that the big power player males of the show's fictional Washington, D.C. were actively using their careers and statures to get interns and other women to sleep with them. And as one character made a speech about standing up and speaking out for not only herself but any other young woman who'd been victims of such a crime, it was so similar to the #MeToo and Time's Up movements in real life.

Not only did the show's plot during the episode bare a striking resemblance to the very real social issues of today out in the real world, but it also addressed consent in general.

In the episode, a "Fresh Meat List" was discovered to have been circulating among the different men in Washington for literal decades and, terrifyingly enough, it was up to date. There were not only the names of women who'd been pressured into sexual acts for fear of losing their positions or the possibility of building a career in the city, but also crass abbreviations for what they would and would not agree to sexually. The whole point was that if one of the women listed had a reputation for not giving into such pressure, she wouldn't stand much of a chance of being hired if she happened to be applying for a job with one of the men who supported the list.

When one of the Washington staffers who appeared on the list agreed to come forward and describe on live TV what had happened to her and how she'd been the victim of sexual misconduct in the workplace, it prompted other women with similar stories to come forward, just like the #MeToo movement has done for countless real life victims of sexual assault.

And when Olivia was urging the young woman to come forward with her story, she said, "If no one finds the courage to take these men on, they're just gonna keep doing what they're doing." That couldn't be more accurate for all of the real life crimes being committed against women.

With just four episodes left of the series as a whole, the writers are making sure to send powerful messages to close out the final season of Scandal. Even though the story of the missing intern ended in tragedy, it did touch on important topics that mirror so many real life issues happening right now. And they even managed to tie Olivia and Fitz into that when he worried that he'd done the same thing to her. Of course, Olivia shot that down quickly, assuring him that there was consent on both sides, but it also allowed for some Olitz progress that viewers really haven't seen in a long time.

Even while moving the larger storylines along in Thursday's episode, Scandal managed to bring attention to current issues that deserve a platform to be discussed. I can't be the only one already crying about the end of this show.