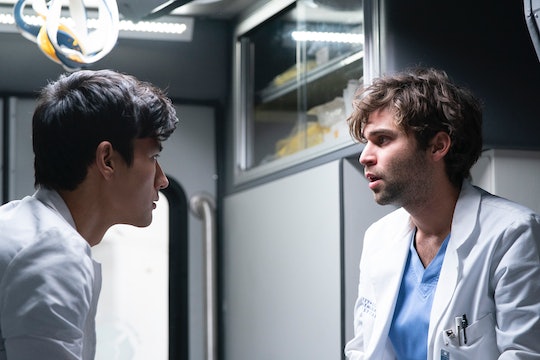 Nico and Schmitt might be the next big Grey's Anatomy couple. After they realized their mutual attraction this season, it didn't take long for them to become a *thing* and start hooking up on a regular basis. But somewhere along the way it became something more and tonight on Grey's Anatomy, Schmidt told Nico he loves him and Twitter is screaming.

After seeing Amelia and Owen's issues this season, Nico and Schmitt, or Schmico, if you will, have been a light at the end of the dreary relationship tunnel. Fans have been shipping them hard since they first kissed. Now, they are in love and hopefully endgame.

Although Nico is Schmitt's first love and I can see that being an issue for Nico somewhere down the line, they seem to be doing better than almost every other couple on the show who isn't married. They do have something of a long road ahead of them, though. Schmitt still has to introduce Nico to his mom, who he hasn't officially come out to yet. Then, they have to figure out where they stand as far as their relationship goes. But right now, Schmico has the full support of Grey's fans.

Meredith and DeLuca might also be on the healthy relationship train, but there is something so fun and pure about Schmitt and Nico finding themselves as a couple. You don't often see first loves on Grey's and you're more likely to see totally jaded doctors finally find love with each other. Schmico is like a breath of fresh air.

Schmitt and Nico are in the first openly gay male couple featured on the show in its 15 seasons. Their love is new territory for the show in more ways than one and now that Schmitt has declared his love for Nico, there's no turning back. Not that Grey's fans would allow it to end now, because the Schmico ship has already set sail and it isn't going to port anytime soon.

Not only has the relationship been fun for fans, but it looks like it's going to positively impact Schmitt as a doctor. Jake Borelli, who plays the doctor formerly known as "Glasses," told PopCulture.com that viewers will see how he evolves as a doctor with his newfound confidence. "I think we're going to see a lot more of their relationship, which I'm very excited about," Borelli said. "And I'm also super excited because there's gonna be more of, sort of how Levi changes as a doctor, and as a human after his coming out."

Borelli also gave a shoutout to Shondaland for representing the Queer community through Nico and Schmitt's relationship. "It's honestly just been such a blessing to even be a small part of this process," he added.

There is a chance that Schmitt and Nico will hit a rough patch before they get their true Grey's happy ending, but in the meantime, fans are having a good time watching the new couple fall in love and navigate a new kind of relationship. For Nico, that means being with someone who is inexperienced in every sense of the word. And for Schmitt, that means being with a man and being in love, which are both firsts for him. But to be honest, they already seem totally at ease with each other.

So far, they have made it work together so I am in full support of Schmico, but as with all things on Grey's, their relationship could eventually get a little dark and twisty. For now, let's enjoy this newfound love and one of the best things on Grey's right now.