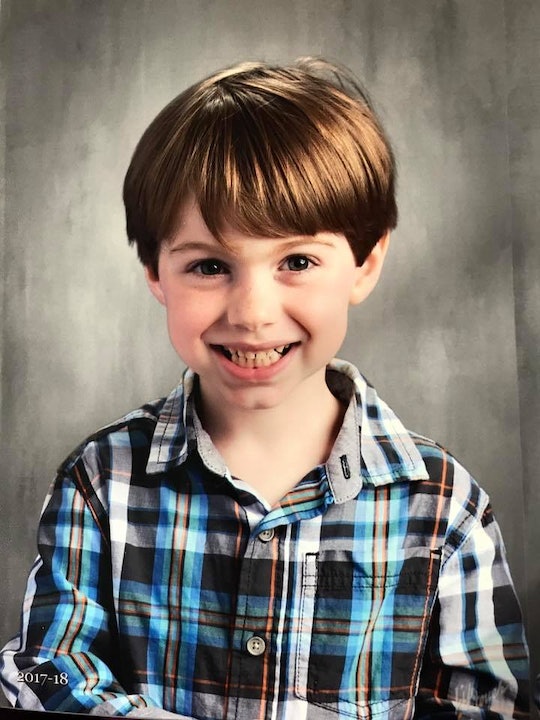 School Pictures Are A Rip-Off, So Why Am I Buying Them AGAIN?

The emails start almost immediately after school begins. "Oh hey, parent! It's us, Big Enormous Photography Company! We're just letting you know that school picture day is coming up in a few weeks, so here's a link that will enable you purchase photos. You like paying $50 for, like, six pictures, right? Great! Hurry up and order before it's too late and you forget what your sweet baby looks like because they're going to grow up and leave you!" Make no mistake, school pictures are a rip-off. So, um, why do I keep buying them?

Normally I'm pretty immune to the sentimental, emotionally coercive sales pitches that pervade so much of parenting. The whole "buy this extremely expensive car seat because it's the best and safest and don't you want your baby to be safe" thing? Yeah, not going to work on me. I know I can buy a less-expensive-but-just-as-safe model, so I'm not one to allow some big shot company to make me feel as if I'm failing my child for also being financially responsible. And the idea that if my child wants an Elmo birthday I have to buy the biggest and most expensive Elmo piñata and literally every Elmo branded party favor I can find, lest I ruin their lives? Sorry, but I'm unsusceptible. I know these pitches are nothing more than the opportunist machinations of savvy entrepreneurs, preying on the fact that we adore our children and want them to be safe and happy. They also know that we know that the time we have with our children is fleeting, and that we only have so many opportunities to indulge them and to make and preserve our memories with them.

My husband jokes that when he's really exhausted and our kids want to play with him, his first reaction is to say no, but then he hears "Cats in the Cradle" play in the back of his head and he's guilted into a tea party or building something with Legos. But a benefit of being cynical AF means that, for the most part, I can scoff at these attempts to shame me or scare me into spending money without feeling guilty.

But school portraits are different.

For the record, I resisted them for a while. Both of my children went to daycare and then pre-school and in both cases we were offered portrait packages. Initially I thought it was absurd. "I have a million pictures of these kids, I even print pictures once a year so I have my favorites up on the walls. Why do I need 'school' portraits?"

Then I got the proofs.

There were my sweet, precious, photogenic children, beaming, straight and tall in the classic "school portrait" pose. I was instantly flooded with what can only be described as, "OMG, my babies are humans now. They look just like tiny little people!" In addition to the quintessential, shoulders-up portrait, there were other poses. My child sitting primly next to a globe or a stack of books. (So scholarly!) My child standing jauntily with their hands on their hips or their arms crossed. (So sassy!) There was even one pose done on a rustic sled. (Perfect for Christmas cards, which the company can actually make for you for a *small* fee.)

How could one possibly say no to such magical mementos?

But I did. Somehow I resisted. After all, I have a ton of pictures of my children, those pictures were expensive, and it's not a "school portrait" if they're not kindergarten through senior year of high school. Buying these photos via daycare or pre-k felt like jumping the gun on an otherwise important milestone.

I'm fine with overpaying for something I could more or less do on my own, because here's a charm and a sense of continuity and tradition in school portraits that I don't think I could personally capture.

Once kindergarten rolled around, however, all bets were off. I needed these images. I didn't care if they were $7.50 a picture when you can seriously get prints for under a quarter each at a bunch of places. In spite of annually printing personal photos from among, literally, thousands of completely free images I already had of my kids on social media, I considered the school portrait priceless.

I think a lot of it has to do with tradition, both within my own family and inter-generationally. It's a great way to see definitive growth in a child from year to year— it's almost like a "control picture." It's taken at about the same time annually, same pose, same lighting, and same circumstances. It's also just such a cultural touchstone, too, and my kids' school portraits look just like mine and my mother's and grandmother's. It's cute to be able to hold up my picture next to everyone else's and say, "OK, this is my mom in kindergarten, and here's me and my son at the same time." It's also a kind of rite of passage to see a 20-year-old school portrait of you hanging on the wall over an older relative's house and feel a rush of good-natured embarrassment as you think that, when they talk about you to people who've never met you, they point to that picture. I'm 35 and my dad still keeps my second grade photo in his office. I'm wearing an enormous white bow and a denim shirt with fringe. The background? Lasers. Obviously.

Look, are these pictures strictly speaking necessary? No. I think you and your children can lead perfectly happy, fulfilled lives without spending way too much money on them. But, for me, they hit my sense of sentimentality and preemptive nostalgia in a way that makes me feel perfectly justified. I'm fine with overpaying for something I could more or less do on my own, because here's a charm and a sense of continuity and tradition in school portraits that I don't think I could personally capture.

And so, Big Enormous Photography Company, please take my money. I can't wait to see how this year's portrait turns out. See you next year.