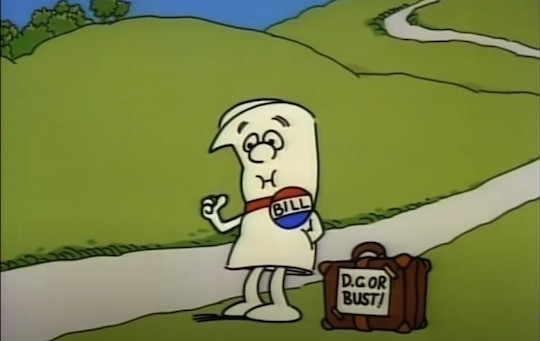 'Schoolhouse Rock!' Is Coming To Disney+ & Talk About A Blast From The Past

Get ready to introduce your kids to the famous ditty about a bill who's just sitting on Capitol Hill because Schoolhouse Rock! is coming to Disney+. Next month, the beloved musical series from the 70s that's been teaching kids about grammar, civics, and more for decades will be available for younger generations to watch without dusting off your old VHS tapes.

Season 1 of Schoolhouse Rock! will make its debut on Disney's streaming service on Friday, June 19. Each episode is just a few minutes long and includes a kid-friendly song designed to teach kids a new concept in subjects like math and grammar. Schoolhouse Rock! has tackled the importance of using conjunctions in sentences with the song "Conjunction Junction" and has also taught kids how bills becomes laws with the iconic bop "I'm Just A Bill."

While Season 1's Disney+ debut date has been confirmed, it's not clear when the six other seasons of Schoolhouse Rock! will be available to stream. But if the first season doesn't include your favorite Schoolhouse Rock! song, you can find a number of Schoolhouse Rock! clips and songs on Disney's website and YouTube channel. Or, you can purchase a specific episode you might be looking for on Amazon Prime for $1.99.

Beyond Schoolhouse Rock!, there are many more exciting titles coming to Disney+ in June, like Tarzan and the first season of Muppet Babies Play Date. In the meantime, you can utilize your Disney+ subscription by watching the many animated shorts as well as your favorite Pixar movies.