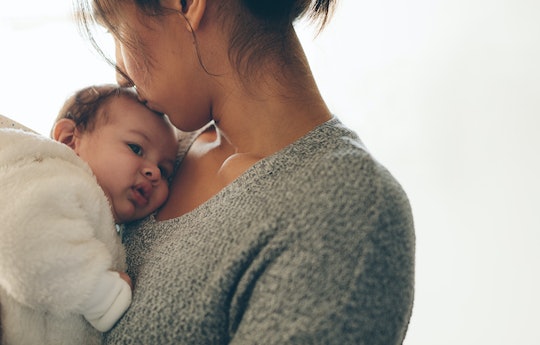 Postpartum depression affects many new mothers. And while some have found success in treating their PPD with regular antidepressants and through therapy, there is no drug on the market that specifically targets postpartum depression — but there may be one soon. After years of work, scientists hope to finally release a drug that targets the hormonal changes that cause PPD sometime this year.

The drug in question is brexanolone, and it's being produced by a biotech firm called Sage Therapeutics, as HuffPost reported last week. As the outlet explained, Sage Therapeutics has been developing the drug, which is a neurosteroid, for half a decade. Its developers think brexanolone will completely change the way doctors treat PPD. Five years ago, the developers reached out to Dr. Samantha Meltzer-Brody, a psychiatrist and Director of the Perinatal Psychiatry Program, UNC Center for Women's Mood Disorders. Dr. Meltzer-Brody administered an initial trial of the drug, which is taken intravenously, on four patients who were battling severe symptoms of PPD at the time.

"In clinical trials, brexanolone was shown to take effect within days of administration," Dr. Meltzer-Brody tells Romper in an email. "In my opinion, the results seen in clinical trials with brexanolone has been profound and dramatic. We’ve seen patients living with severe PPD — unable to eat, disinterested in daily activity and disconnected with their families — improve significantly within days."

Early detection could become even more important if brexanolone ever makes it to the market, as the drug remarkably had an effect on the patients Dr. Meltzer-Brody studied within days. "Commonly prescribed antidepressants, like SSRIs, often take weeks to kick in," Dr. Meltzer-Brody tells Romper. "The quick efficacy of brexanolone makes a world of difference to new mothers who are trying to manage the symptoms of PPD—including trouble bonding with the newborn, overwhelming anxiety or challenges with normal, daily functioning."

"The fast onset of action of this treatment has the potential to be life-changing for mothers with PPD, as well children and family members impacted by their condition," says Dr. Meltzer-Brody. "PPD may affect as many as one in five new moms and up to half of these cases may go undiagnosed without proper screening."

Over the past few years, there have been several trials of brexanolone, including one that was published in July 2017, and another in November 2017. So why, several years later, is the drug still not on the market? Jeff Boyle, who works in Corporate Communications for Sage Therapeutics, tells Romper via email that the team hopes to launch brexanolone next year:

Additionally, Dr. Meltzer-Brody says that conducting the trials they have within just three and a half years is actually pretty quick. She tells Romper:

Sage’s development of brexanolone has only take 3.5 years from first patient to completion of two phase 3 trials. This is actually quite fast in the world of drug development as clinical trials are complicated to run. The human brain is a complex and integrated network, and neurological disorders don’t have the same diagnostic tests that other biological sciences do. The good news is that researchers have a much better understanding of the neuroscience and brain mechanisms than in previous years and are confident about this constantly evolving understanding.

Postpartum depression is an increasingly important issue for not only mothers, but also fathers. In the United States, statistics surrounding how many mothers PPD affects vary. According to the Centers for Disease Control and Prevention, PPD affects one in nine women. However, that statistic varies amongst different ages, races, ethnicities, income, and what state you live in. And according to a 2013 study published by JAMA Psychiatry, one in seven mothers exhibit symptoms of PPD. The reason for these varying statistics could be that some cases of PPD go undiagnosed or unreported.

There are many different symptoms of PPD, according to the Mayo Clinic. Symptoms include severe mood swings, excessive crying, trouble bonding with your baby, withdrawing from loved ones, change in appetite, trouble sleeping, severe tiredness, anxiety, panic attacks, and feelings of worthlessness. The Mayo Clinic recommends asking your doctor to monitor you for signs of depression while you are still pregnant, especially if you have experienced depression or postpartum depression before. And after your baby is born, the Mayo Clinic says your doctor may ask you to come in for a postpartum checkup shortly after giving birth, as early detection is helpful.