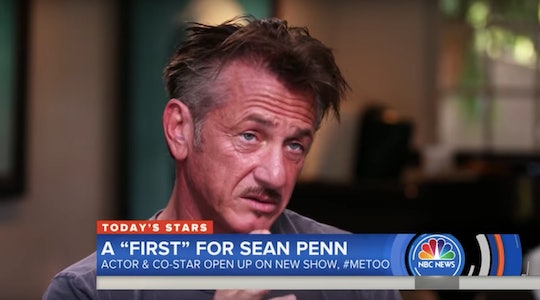 During an interview on Monday with TODAY for his upcoming new TV series, Sean Penn made comments about the #MeToo movement that have Twitter enraged, and rightfully so as the actor suggested that its mission is “to divide men and women.” Romper's requests for comment from Penn's representatives regarding the comments and the backlash were not immediately returned.

The 58-year-old actor sat down for the interview alongside co-star Natasha McElhone as they discussed their Hulu series The First, which chronicles the journey of the first astronauts to go to Mars. And, according to interviewer Natalie Morales, the series showcases women in a big way, as Variety reported.

During the TODAY interview, Morales honed in on that, asking whether the series was influenced by #MeToo, a movement that aims to "support survivors and end sexual violence" that went viral in October 2017. While McElhone said she found television lacking in depictions of women, Penn went straight for the heart of #MeToo.

“I’d like to think that none of it was influenced by what they call the movement of #MeToo," Penn said, according to TODAY. "I think it’s influenced by the things that are developing in terms of the empowerment of women who’ve been acknowledging each other and being acknowledged by men."

He continued, "This is a movement that was largely shouldered by a kind of receptacle of the salacious."

Morales then asked Penn to clarify, so he drilled down to say that he believes the movement has divided the sexes:

Well, we don’t know what’s a fact in many of the cases. Salacious is as soon as you call something a movement that is really a series of many individual accusers, victims, accusations, some of which are unfounded. The spirit of much of what has been the #MeToo movement is to divide men and women.

Morales countered that many women say it, in fact, unites women, to which Penn responded by recounting his personal experience, claiming the women he’s spoken to have indicated #MeToo doesn’t represent their own lives and views. He also went on to voice hesitancy about the speed and tenor of the movement.

“I’m very suspicious of a movement that gets glommed onto, in great stridency and rage, and without nuance," he told Morales in the same interview. "And even when people try to discuss it in a nuanced way, the nuance itself is attacked […] It’s too black and white. In most things that are very important, it’s really good to just slow down."

Twitter was not about to slow down, as users quickly jumped to remind everyone of past allegations of domestic abuse against Penn, according to Rolling Stone.

Other users took the chance to remind everyone what #MeToo is about, disputing Penn’s claim that it is simply a loose collection of unrelated accusers.

Still others decided to have some fun with Penn’s rambling discourse and disjointed phrasing.

This isn’t the first time Penn has attacked #MeToo. In an interview with The Guardian in May 2018, he made statements that the movement was “not intellectually honest” and "led by mania,” and full of “self-aggrandizement and venting.”

After Penn’s comments, Morales turned the spotlight back to McElhone and asked if #MeToo issues were discussed on set. The actress said they were talked about “a great deal” and tried to smooth over a bit of Penn’s rough approach. According to TODAY, McElhone said:

I think what Sean was maybe alluding to is this sort of bubble of actors or people who are in magazines that have gotten a lot of attention from this. Of course, it’s terrific that they’ve put a spotlight on it. But now, it’s we need to go to the places where this is happening behind closed doors, and it’s not exposed and those voices aren’t being heard.

Yes, more of those voices please, and less of those like Penn.