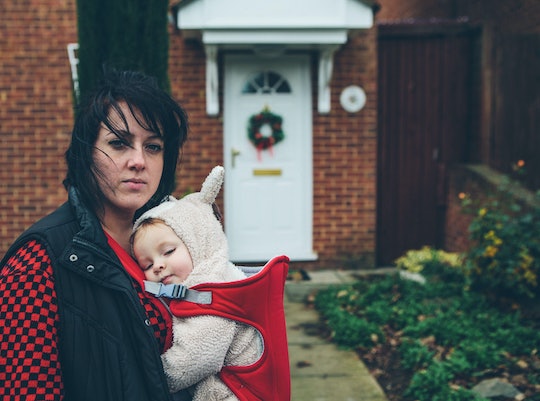 Mother of four Jami Lea can count on one hand the number of times she’s left her kids in over a decade. Sadly, lack of family support means that Jami had had some bad experiences when leaving her kids, which has led her to develop maternal separation anxiety. “My oldest is 14, and I can recall just a few times I’ve left them all with anyone besides my ex. Twice with my mom, once with my sister, and twice with my best friend. I am not comfortable leaving them with anyone else.”

Lea’s oldest child was 4 years old the first time she was apart from her and the only reason she left her child was to give birth a second time — Lea recalls that the anxiety of separation was completely overwhelming. This past fall her family began a huge transition, as she ended homeschooling and sent her oldest three children off to public school. “I’m doing mostly OK. I have anxiety at times, but so far I am able to manage it. All of my kids have some degree of anxiety as well, but I am pretty proud of how we have adjusted so far.”

Being apart from her baby can be difficult for a breastfeeding mother, as Erin Thompson, a Pittsburgh mother of a now-3-year-old, found when she had to have emergency gallbladder surgery at six weeks postpartum and didn’t see her baby for 48 hours. “It was pretty paralyzing and unexpected. The whole surgery made it worse and it took me a long time to willingly leave her again… she was over a year old before I really left her willingly again.”

Erin still struggles with mixed feelings over leaving her daughter still to this day — sometimes periods of high anxiety, but also a short period once a week where she focuses on her own well-being with some much-enjoyed “me time.”

An estimated 15-20 percent of mothers experience perinatal mood disorders, and the rest are dealing with the adjustment to parenthood, according to the Motherhood Center of New York City. To help new parents cope, experts like renowned psychotherapist and author Esther Perel commonly recommend time alone and away from baby without a curfew. “Too much time spent with child” was a parental stressor identified by a study in the American Journal of Public Health, but a study by meal app Munchery found parents have just 32 minutes a day of alone time. So parents both need alone time to feel replenished, and feel guilty about taking it, potentially leading to greater levels of anxiety. The mothers I spoke to about the first time they were away from baby fell across the spectrum.

Sitting in a Baltimore restaurant after her friends have gone home, the mother of a 1-year-old son, Kimberly Corrigan, reflects on the first time she left her child. She went to get her nails done, while a family member watched her baby. “Someone told me I acted like Axel was my second kid,” she says. “I asked if that was bad?”

The youngest of five kids who all had children before her, and a first-time mom in her thirties, Corrigan says she wasn’t anxious about leaving her son. “He is just such a good, chill baby. I never worried. Tonight I just needed a break from the baby, so I met friends for an early dinner. I came early, and I am staying late. Just enjoying sitting here alone for a bit.” She has wondered if something is abnormal about her, that she worries so little compared to other moms. Maybe she should be more anxious?

At 8 weeks old he was a colicky baby and never stopped crying. I knew how hard it was.

Nicole Schwartz, a mother of two boys in Houston, had a very different experience. “I wasn’t worried about his safety or anything. I was more worried about my sister, because at 8 weeks old he was a colicky baby and never stopped crying. I knew how hard it was.”

Nicole and her husband ran out for a quick bite between feedings, since their oldest never took a bottle. She felt relaxed enough to enjoy herself a bit, but felt an urgency to get back home. Upon return, both the baby and her sister were crying. It had been a rough couple of hours.

“I am someone who likes control, and I think it’s kind of funny that God humbled me with my first baby, who taught me that I just can’t control everything.” Since that day, Nicole has relaxed more and has no problem leaving her two boys when she needs to. Living far from extended family, she got comfortable with the idea of hiring sitters from an early age. “It’s just our normal,sadly, I guess.”

Nicole recalls having more anxiety the first time she went away for several nights, leaving her oldest with his dad. He got a typical kid injury, falling into the corner of a sandbox, but she felt guilty for not being there. Her husband was more than capable, though many moms struggle to accept this. A recent Pew poll found that seven in 10 moms felt they could be too overprotective, while only about half of dads felt they hover.

With my middle two children, I hardly left them, ever, because they wouldn’t take a bottle.

Casey Nyssen, a New Hampshire mother of four kids ranging from age 18 down to age 4, reflects back many years ago to the very first time she was apart from her eldest daughter. She sent her off to college this fall, the longest she’s ever been apart from her. Looking back, she has a hard time recalling that first separation. “Given me and my personality, I am almost positive I wasn’t freaking out. Even though I was a really young mom at 20, I was just super chill. My mom still will remark about how calm I was, which surprised her because of my age. Due to the hours of my job I just had to leave her overnight at my mom’s often, so I learned to adapt.”

Now with subsequent children, Casey has felt differently about at different points. “With my middle two children, I hardly left them, ever, because they wouldn’t take a bottle. That was really hard. My youngest was bottle-fed, so I could leave. An overnight when I first left my youngest caused a lot of anxiety for me, though, because I knew I was leaving my husband with four kids.” But he managed.

Speaking with a range of mothers, it is clear that they sometimes have a hard time trusting others — even their partners — to handle things typically under their purview. It is a continual learning process for these moms to learn to let go and feel comfortable.

Whether running out for a quick dinner, an overnight with girlfriends, or emergency surgery, it is clear moms have a wide range of emotions tied to leaving their children. Personality of the mom, temperament of the child, and the situation of the separation all play a role in how a mom reacts to leaving her child for the first time. Some anxiety is typical, but many mothers whose anxiety has surpassed the boundary of “typical” benefit from professional counseling.Because moms do not feel “depressed” they often do not realize that postpartum/maternal anxiety can be just as serious as postpartum depression, and brush off their feelings as “new mom jitters.” Despite their wide range of emotions, all of the moms here agreed that time away from kids to recharge is essential to their well-being, and makes them better mothers in the long run.