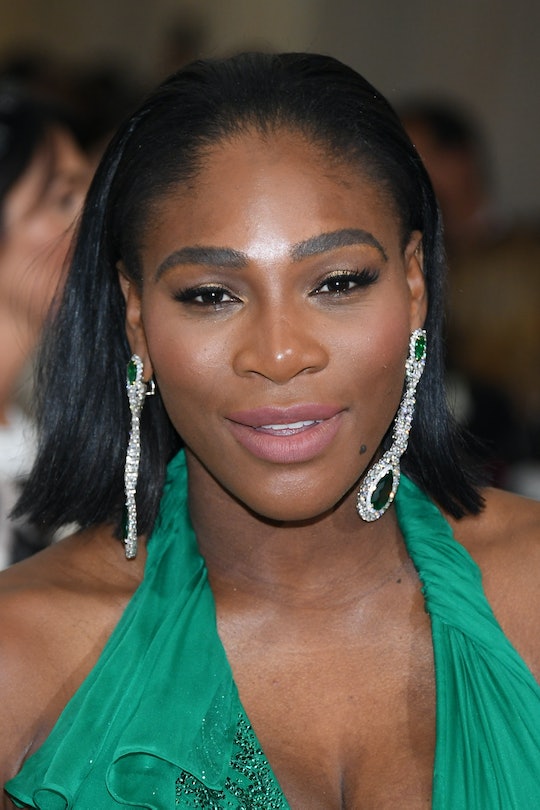 On Wednesday, tennis goddess Serena Williams released the first photo of her daughter on Instagram. Williams also shared a short video talking about the pregnancy and birth, noting that she had "a lot complications" along the way. In a beautiful Instagram Story, Williams introduced the world to Alexis Olympia Ohanian Jr., born Sept. 1 in West Palm Beach, Florida. Williams said in the video that she and her daughter were leaving the hospital after "six or seven days." She didn't specify what the particular complications were, but ended the clip on an upbeat note: "Look who we got: We got a baby girl!"

Williams' Instagram Story featured 12 short clips documenting her pregnancy from her first ultrasound where she found out she was pregnant to her daughter's big reveal after she was born. It's actually a really sweet and moving Instagram Story, which thankfully Williams' fiancé Alexis Ohanian has uploaded to YouTube, with the appropriately nerdy title of "Hello world." (My fellow Reddit and computer geeks will get it.)

Since Instagram Stories only appear on the mobile app, Williams also posted a beautifully serene close up photo of her holding her newborn daughter to Instagram on Wednesday morning. The look on Williams' face is one of truly pure bliss.

While Williams didn't specify her pregnancy complications she faced that left her daughter in the hospital so long, it's entirely possible that Hurricane Irma could have been a factor. Williams' daughter was born on Sept. 1, and, according to her Instagram Story, they weren't released from St. Mary’s Medical Center in West Palm Beach, Florida for another six or seven days. At the time, Hurricane Irma was projected to make landfall somewhere over Florida's east coast — but there were plenty of evacuation warnings throughout the state. Representatives for Williams did not immediately respond to Romper's request for comment on what specifically the complications were.

Hurricanes aside, it seems as though Williams made it to full term for the birth of her daughter, with a clip within her Instagram Story showing her at 39 weeks as they finished up their daughter's nursery. Ohanian Jr. was born weighing 6 lbs., 13 oz, which is a totally healthy weight for a newborn. That doesn't mean of course that Williams didn't experience some kind of complication arising during labor, birth, or post-delivery. If anything, Williams' post is a reminder that even one of the greatest tennis champions of the world is still just as human as any laboring mother.

This is Williams' and Ohanian's first child, and the pair couldn't be any more over the moon — it's so obvious from all of the sweet clips that were included in Williams' Instagram Story introducing her daughter to the world. They shared brief glimpses of their journey to becoming parents, from Ohanian putting together a stunning rose gold crib for their daughter, to so many silly clips of Williams dancing, practicing, and talking to their daughter while still in utero. The whole Instagram Story is just incredibly sweet and really shows off a beautifully candid side of the new parents. You can watch the whole video below.

Given how social Williams is on both Instagram and Snapchat, it's exciting to realize that there will probably be plenty more photos of her daughter to come. I have to admit: I'm weirdly happy for Williams and Ohanian, even though I'm not a huge tennis fan, nor do I know that much about Ohanian. It's just a very nice and much welcome change of pace to have such happy news like getting to see the first pics of Williams' daughter. I hope we get to see even more photos of Williams' new mama glow and her little one soon.