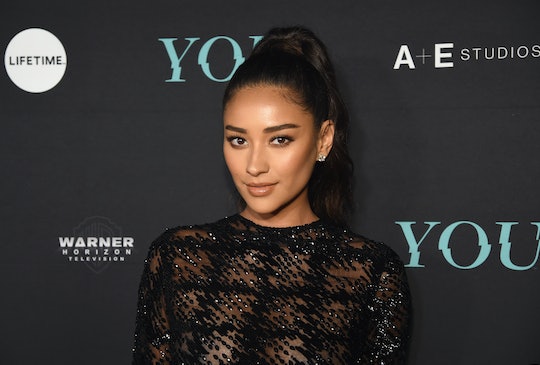 This Pretty Little Liars alum is a few short months away from welcoming her baby girl into the world, and it's safe to say she's counting down the days until her little one's arrival. In fact, Shay Mitchell's latest pregnancy updates show she is in full-on "nesting" mode at the moment. As you'll see shortly, Mitchell has perfected the art of this pre-delivery phenomenon.

Mitchell, who is expecting her first child with boyfriend Matte Babel, is over-the-moon to become a mom sometime in late September or October. Fans witnessed then when she held her baby's sex reveal in July, which featured an epic battle between Power Rangers attired in pink and blue (pink won, she's having a girl). And after the big reveal came pregnancy photoshoots, bump updates, and hints about her due date. As for Mitchell's latest update? She took to Instagram on Monday to reveal that she's all about nesting these days.

It all started with a gorgeous pic Mitchell shared, featuring a bouquet of white flowers, a candle resting on top of a book, and an antique vase. "I think it’s called nesting..." she captioned the beautiful setup.

Another person commented: "Nesting at its finest."

"I don't care what you call it insanely cute," wrote another fan.

But wait — that's not all. Mitchell also took to her Instagram Stories account to show off her latest home renovations. "This is called nesting apparently, when you do last-minute renos on your house," joked Mitchell as she walked down the stairs in comfy slippers, surrounded by the telltale signs of construction, such as plastic sheeting over her lighting fixtures.

Yep, that's exactly what's happening, mama. From your sudden urge to arrange flowers to your crib shopping ventures, you're in nesting mode.

Oh, and I did mention Mitchell recently went crib shopping to boot? She hilariously didn't seem to realize that sample models for cribs are often smaller in size, with her wondering out loud why cribs are supposedly so tiny. But at least a fan let her know in the comments section of her Instagram account that she shouldn't worry, as real cribs come in a size that won't squash the baby. Ha!

"Lol girl. your last story. those cribs are probably bigger than that," the fan joked. "They often make them squished for display purposes."

Of course, nesting is completely normal for expecting parents. I remember a mom from baby group, for example, who reported that at nine months along, she saw a small speck of dirt on her bathroom floor and got down on her hands and knees to clean it with a toothbrush, as she was worried about the baby bathing in any possible grime. It happens.

I always thought of Mitchell as more of a glamorous type before this, but it's clear she's a down-to-earth lady who is eager to show fans her off-camera humor and very relatable adjustment to family life.

I think it's safe to say this star is going to be just fine, even with all of the nesting behavior that can be typical for a first-time mom. This will be likely be followed by obsessing over nursery decor and arranging teeny, tiny onesies in a closet that's cleaner, fancier and more detailed than her own. But don't worry, mama — this is all par for the course when you're having a baby.