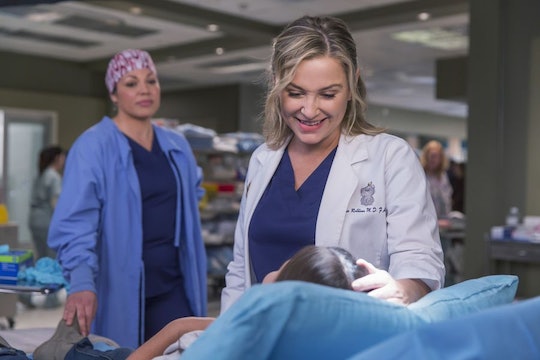 Should Callie & Arizona Get Back Together On 'Grey's Anatomy'? Callie Deserves Better

The "Calzona" ship on Grey's Anatomy is one of the greatest ships the show has ever seen. What began as a simple kiss in the bathroom of Joe's Bar, grew into a very real relationship and Callie's first major relationship since coming to terms with her sexuality. Callie and Arizona fell in love, survived the shooting together, had a baby, got married (and with Callie's dad's blessing!), and it seemed like they might last forever. But, all good things come to an end — which led to Calzona breaking up. But should Callie and Arizona get back together on Grey's Anatomy, or is this a ship that should stay docked.

After the plane crash, and the loss of Arizona's leg, the Calzona ship began to sink. Their relationship was rocky, at best, and then Arizona really put the nail in the coffin when she cheated on Callie. Honestly, it still hurts just thinking about it. How could you Arizona?

After that, Callie and Arizona attempted to make it work, even going to couple's therapy. But, in the end, Callie realized that she was better off without Arizona, free to dance around in her underwear as much as she wants and be the person she used to be. Just like that, the two divorced and officially sunk the Calzona ship. Or did it?

Although Callie is dating Penny, Callie and Arizona have been on great terms recently. Arizona is getting back out in the dating game and she's happier than she's ever been in a while, and similarly, Callie seems pretty happy with her life right now, too.

But, Penny just got a research grant, so it seems Callie's new girlfriend will be leaving Grey Sloan. Cue the rejoice, Calzona's shippers, because with Penny gone that leaves the door wide open for a Calzona make-up. But will it really happen? Better yet, should it?

Probably not. I'll be the first to admit Callie and Arizona were cute together and, yes, they gave me all the feels, but that was before Arizona cheated. Callie did everything for Arizona after she had Alex cut off the leg, but Arizona couldn't get past it and hurt Callie in the worst way.

To be fair, they had other issues after that, which ultimately led to their divorce (Arizona's miscarriage, for example), but for me, Arizona's cheating was the point of no return, especially because this wasn't the first time Callie's spouse was unfaithful to her. I love Arizona, but I love Callie more, and Callie deserves better. I'm not sure if that person is Penny, but I'm sure it's not Arizona. Hopefully Callie finds her happy ending on Grey's Anatomy soon. She deserves it.