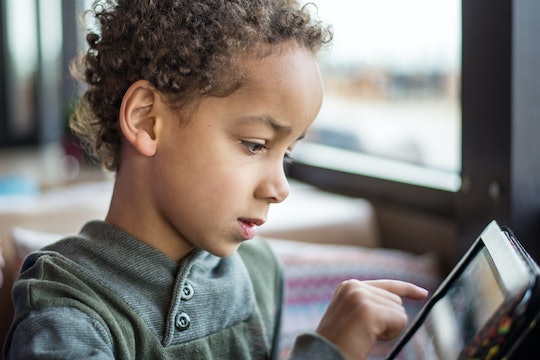 Red, orange, yellow, green, blue, indigo, and violet make up the colors of the rainbow, but there’s one shade that’s been getting some shade of its own lately — and that’s blue light. In an effort to cut down on the “bad” light, some experts have suggested that kids wear blue light-filtering glasses.

Before you run off to purchase a pair for your child, though, you should know a thing or two about blue light and what it does. During the daytime, blue light is very beneficial to the body. It boosts attention, reaction times, and mood, according to the National Institutes of Health. But come nighttime, when your child should be getting ready for bed, blue light can become bothersome. Unfortunately, all the tech that kids covet and crave — such as smart phones, tablets, LED monitors and flatscreen TVs — exposes them to blue light.

That wouldn’t necessarily be an issue, except that blue light is a stimulant, and exposure to it suppresses the secretion of melatonin, a hormone that aids in your circadian rhythm, reported Harvard Health Publishing. “Blue light is at the more stimulating end of the light spectrum,” says Dr. Lynelle Schneeberg, Psy.D., a fellow of the American Academy of Sleep Medicine and author of Become Your Child’s Sleep Coach. “It can make your child feel more wakeful even when they’re tired.”

When blue light blocks the body’s ability to naturally wind down after a long day, it can cause sleep problems. The American Optometric Association reported that even a week of additional blue light exposure can decrease sleep time by about 14 minutes nightly. That might not seem like a big deal, but when kids don’t get enough sleep at night, over time they can become at risk for not just forgetfulness, but bigger health issues such as heart disease, weight gain, depression, and an increased risk of diabetes, according to Healthline. “Lack of sleep can also affect your child’s executive functioning,” says Dr. Schneeberg.

While light of any kind can suppress the secretion of melatonin, blue light packs an even bigger biological one-two punch. In a study, Harvard researchers compared 6.5 hours of blue light exposure to green light. They found that blue light suppresses melatonin for about twice as long, and shifted circadian rhythms by twice as much.

As for your child’s eyes, prolonged exposure to blue light can be detrimental. “You can experience eye fatigue and strain,” says Dr. Hang Nguyen, an optometrist in Newton, CT. “You won’t be able to read as long, and your eyes can get tired as well, leading to decreased attention span.” Dr. Nguyen recommends blue light-filtering glasses “to anyone who works on any electronics,” but says that parents should start get them for their kids “around the age of 6, when kids tend to be more responsible.” And if your child already wears glasses, you can request a blue light filtering coating to decrease exposure.

Now, it’s important to keep in mind that while blue light-filtering glasses will absorb most of the light, they won’t completely block the blue wavelength completely. “The glasses will prevent a large percentage of light from entering the eye so that the cornea and lens will absorb most of it and protect the retina,” says Dr. Nguyen. The American Macular Degeneration Foundation stated that over time, exposure to blue light can lead to macular degeneration.

Of course, blue-filtering glasses surely aren’t a substitute for proper screen time management. Ideally, kids would be better off cutting down on the amount of time spent on digital devices, which are a major source of blue light. The American Academy of Pediatrics (AAP) has new guidelines for children’s media use. For example, children 18 months and younger should not have screen time at all sans for video chatting; as for toddlers and preschoolers, the AAP recommends limiting screen time to just one hour daily. And the AAP advises parents of children ages 6 and older to “place consistent limits on the time spent using media, and the types of media, and make sure media does not take the place of adequate sleep, physical activity and other behaviors essential to health.”

If you don’t want to buy blue light-filtering glasses for your child (or more accurately, if she doesn’t want to wear them), there are other natural alternatives to decreasing the artificial light issue. For starters, you should limit exposure to electronics at least 1-2 hours before bedtime, advises Dr. Schneeberg. Also, keeping your child’s bedroom dark can help induce sleep.

“A nightlight is fine, as long as it has an incandescent bulb,” says Dr. Schneeberg. “Blue is a relaxing color when it’s not a direct light source.” And if your kid must use an electronic device before lights out, he can always put the nighttime settings on his phone or use the blue light filter on his computer to help diminish emissions.

Above all, find out how much rest your child should be getting at night. The National Sleep Foundation offers some general rules for how much sleep your child needs. Make sure that your kid’s bedtime routine is soothing and sans screen time — such as TVs, tablets, and the like — and you’ll set the stage for better sleep for everyone, blue light be damned.