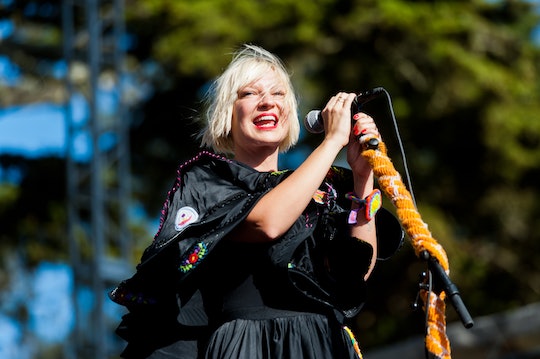 Families come in all different shapes and sizes and, in some cases, families come along in ways you might not have expected. Such is the case for singer Sia, who revealed she adopted two teenage sons when they were about to age out of the foster care system.

During an interview on SiriusXM's The Morning Mash Up on Tuesday, Sia confirmed that she became a mom to her two teenage sons last year. "I actually adopted two sons last year. They were both 18. They're 19 now. They were aging out of the foster care system," she explained after she was asked whether or not she adopted a son last year. And of course, as any proud mom would do, the "Cheap Thrills" singer added, "Yeah, and I love them."

The Australian singer didn't share the names of her sons, presumably for privacy reasons, but did note that life has been a bit of a struggle for her family during the coronavirus pandemic as they quarantine at home. "They are both finding it pretty difficult, one more so than the other," she said. "But they're both doing things that are like really good for them right now. That are really helpful. They're really doing a lot of educational stuff that's good for them."

There was some speculation in 2019 that Sia had become a mother, particularly after she was interviewed for a February GQ profile on Diplo when she was quoted as saying: "This year I wrote him a text, and I said, 'Hey, listen, you're like one of five people that I'm sexually attracted to, and now that I've decided to be single for the rest of my life and I just adopted a son, I don't have time for a relationship.... If you're interested in some no-strings sex, then hit me up.'"

At the time, Sia did not confirm any details about her adoption, but it seems she added a second son to her family at some point along the line. She might have chosen to adopt an older child who might be getting close to aging out of the system after being moved by the HBO documentary Foster, in fact. When the documentary featured a 16-year-old boy named Dasani who was struggling to find a permanent home, Sia took to Twitter to offer him a home with her, according to People. In a since deleted tweet last May, she wrote, "Hey Dasani from ‘FOSTER’ on HBO! I’d like to adopt you."

According to the National Foster Youth Institute, more than 23,000 kids will age out of the foster care system in the United States every year and over 20% will reportedly become homeless. Those are heartbreaking statistics, of course, but it's nice to know that at least two kids have found a forever home with Sia.