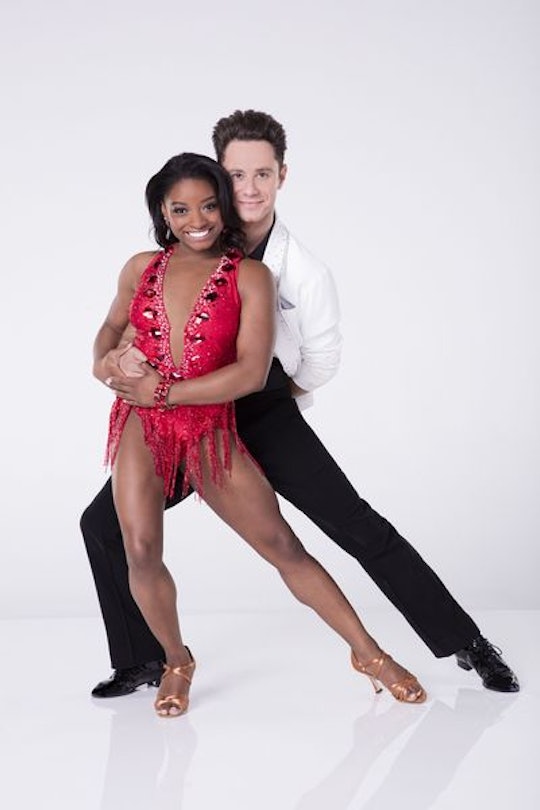 Gymnastics might be an extremely physical activity, but it's still so different from dancing that Simone Biles' first performance on Dancing With the Stars could have been subpar and it would have been understandable. But as it turned out, her tango with partner Sasha Farber ended up being one of the best dances of the night and it was just the first day. Clearly, the four-time Olympic gold medalist can do anything she sets her mind to. Can they start giving out medals on DWTS? Because she would be totally deserving of one after Monday's performance.

In the intro video for Simone and Sasha, she seemed excited but nervous at the same time at the thought of learning to dance from a professional like Sasha. She also made it a point to note that "people have seen me at my best" since the Olympics, meaning the the pressure was on for her to do well with her performance on DWTS, since fans would be expecting her A-game.

Obviously it's kind of impossible to see the adorable Simone in a harsh light and even if her first performance on DWTS had been somewhat lackluster, I'm sure fans would have still been behind her and rooting for her the whole way. But there was no need to worry. Simone's first performance on DWTS turned out to be, in judge Len Goodman's words, "The dance of the night."

Simone and Sasha performed a tango to “Untouchable” by Tritonal and Cash Cash, so she probably already had some votes there, but right from the beginning her moves were fluid and so smooth. And what's more, they didn't even try to sneak in any gymnastics flips. OK, so that would have probably been impossible, but Simone is obviously a quick learner because her first performance looked like it could have been one from much later in the season. When you impress Len on the first night, you're going places.

After their routine, Simone chalked up her confidence to seeing Laurie Hernandez in the audience nearby. Laurie was not only the winner from Season 23, but she was also on Simone's Olympic gymnastics team. The two were part of the Final Five at the 2016 Rio Olympics and Laurie was there in the front row to cheer on her teammate. And, as Simone said herself, she had to "channel [her] inner Laurie."

Before their dance, Simone was every bit as adorable as fans know her to be, giggling as she explained how it's been to get used to being so close to partner Sasha and how the tango basically requires a closeness that might feel awkward to some. But through the initial giggles and blushing, Simone seemed to have totally gotten the hang of dancing with the pro because that high score of all eights was amazing for the first night. In the end, Simone and Sasha ended up with a score of 32 out of 40, which was one of the best of the night. Suffice to say, these two are in it for the long haul.