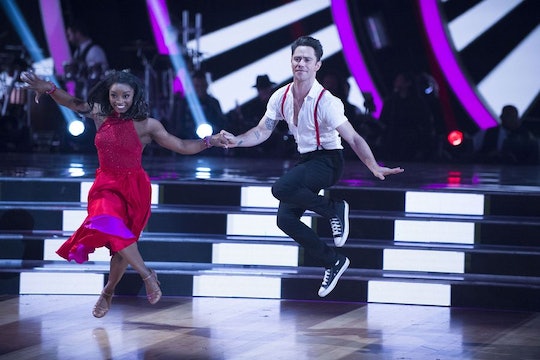 You Won't Believe Who Went Home In The 'DWTS' Semi-Finals

Despite how far she's come this season, somehow Simone Biles was eliminated on Dancing With the Stars in a surprising twist during Monday night's semi-finals. Her scores have gotten progressively better over the past few weeks and overall she's gotten more confident on the dance floor, so to see her go home was a huge shock to fans. In fact, for the first time this season, Biles scored all 10s in both performances and had a perfect score Monday night across the board, which makes her elimination even more surprising.

Unfortunately though, the points calculated are from last week's totals, so those combine with the fan votes weren't enough to keep Biles in the running. So even though the judges loved Biles Monday night, their generous (but warranted) scores couldn't keep her in the running. Of course, in true Biles fashion, she was all smiles and reminded DWTS host Tom Bergeron that she'd be back for the Season 24 finale and "I feel like I've learned a lot about myself," but that doesn't make it any easier to understand.

After Biles' second performance Monday night, judge Carrie Ann Inaba said, "You just danced with your soul tonight" while Len Goodman added, "There was nothing I didn't like," so fans no doubt figured Biles was safe for another week before the finale. Unfortunately, that was far from accurate despite performing flawlessly Monday night.

Previously on DWTS, Biles had been accused of not smiling enough or smiling too much and being too chipper. Basically, not giving enough real emotion during her performances. But recently, she seemed to be able to do exactly what was expected of her and then some. Monday night she even got a little sensual with Farber during one of their dances, which was a huge step for her since at the beginning of season she was uncomfortable with that.

But Biles was still eliminated on DWTS, taking her out of the running for the coveted Mirror ball trophy. And you know that when the judges themselves are shocked, it's kind of a big deal.

Since Biles is a four-time Olympic gold medalist, chances are, she'll be able to bounce back from this with ease, but for her fans before DWTS and while she was on the show, it still makes little sense. Of course, when it comes down to the final four couples, any elimination is going to be upsetting at this point, but Biles' elimination on DWTS was met with confusion as well as disappointment. If the gymnast has taught us anything though, it's that while smiling doesn't win you gold medals, it does help when dealing with tough situations.