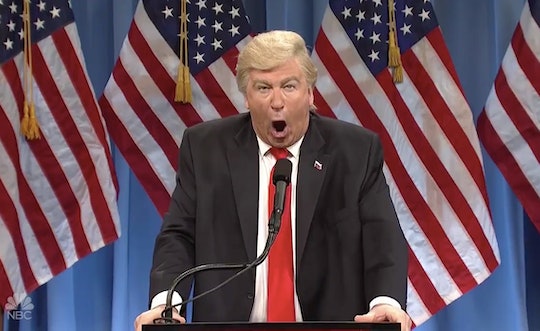 This weekend, Saturday Night Live returned just in time before the upcoming inauguration to give everyone a good laugh. And the SNL Donald Trump press conference cold open with Alec Baldwin was right on point when it came to highlighting how surreal the transition of power to the incoming administration really is. Let's face it — whether you're a Democrat or a Republican (or just wondering what's going on), Trump's first press conference as president-elect was pretty otherworldly.

Between the stack of manila folders to prove that the incoming president won't have any conflicts of interests and Trump dodging questions "golden showers" and his ties to Russia, the whole thing was pretty unreal.

In fact, that's exactly how Baldwin's Trump opened up the fake press conference, saying that he was there to answer the question on everyone's mind right now: "Yes, this is really happening," he advised everyone.

Whether that makes you feel safe or scared is up to you (it's pretty safe to say that the Saturday Night Live writers are a little worried). The sketch hit each and every last too-strange-to-be-real aspect of the news conference and didn't pull any punches.

The golden shower jokes sort of took over the sketch, as Baldwin's Trump calls on reporters and each one eventually devolves into giggling about the alleged sex act. One reporter turns out to be Vladimir Putin himself, who has a video tape with him, insinuating that the president-elect is compromised.

But it wasn't all so serious. Cecily Strong played Trump's lawyer who is literally "drowning in paper," as she describes how he will divest. Kenan Thompson made an appearance as Steve Harvey, who "does politics now," according to the sketch. And of course, they got a a few jokes in at the Trump sons expense, joking that Donald Jr. will take over the company and that Eric, the younger brother, is sort of useless. Baldwin introduces them saying, "Look at those two American psychos." Ouch, right?

It was funny, if you can trust the audience's reaction to the sketch on Twitter, and also a little scary. SNL's version of the press conference — complete with audience members clapping every time Trump answered a question — was hard to distinguish from the real thing.

If it hit a little too close to home for viewers, imagine how Trump and his "American psychos" felt about the sketch. As of early Sunday morning, the actual Donald Trump hadn't responded to the sketch on social media, but a tweet storm blasting the network and Baldwin is just bound to happen soon enough. Although it's not likely, let's hope he could find some humor in it.