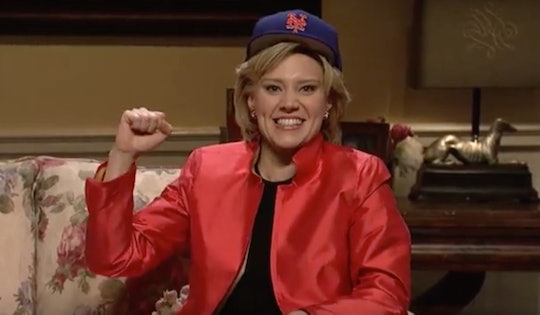 It all started as what seemed like a ploy to out-New York Bernie Sanders. The Democratic presidential candidate told the New York Daily News earlier this month that he thought New Yorkers still used tokens to access the subway system (since 2003, they don't). So, his opponent, Hillary Clinton, embarked on an ill-advised subway jaunt of her own Thursday in a politician's never-ending quest to prove her "authenticity." But it took Clinton — who hasn't even driven since the 1990s — five tries just to get through the turnstile with her MetroCard, and, with her extensive security detail, she even caused another passenger to miss her stop, NPR reported. It was an embarrassing example of how arguably out-of-touch Clinton has become, according to some, and, predictably, SNL's hilarious Hillary Clinton subway skit skewered her for it.

In the show's "cold open"on Saturday, Kate McKinnon as Clinton tells the audience that she has not won a state in three weeks because, in fact, that was the plan. "That's fantastic. It humanizes me," she says, after repeatedly trying and failing to utter the word "lose." "I'm the underdog now."

Well, it certainly seems as though Clinton is indeed the underdog on the subway.

But with the New York primary coming up April 19, the real-life Clinton undoubtedly hoped to drum up support in her home state by getting on that subway train. And McKinnon's Clinton had the same goal (after fake-eating her "favorite dinner," a "classic" New York City street hotdog).

"You know what my favorite part about New York is?" McKinnon-as-Clinton asks. "The subway. I love to ride it, and I am comfortable riding it."

But, as SNL hilariously shows, she's not. McKinnon's Clinton swipes six times with no success, before trying to get in "the old-fashioned way" by climbing over the turnstile. That doesn't work either. "I'll take a cab," she says. "Cab is the best way to get around."

It's been a tough week for Clinton on the campaign trail. On Wednesday, Sanders called Clinton “unqualified” to be president, in part because she has raised millions of dollars from Wall Street. And on Thursday, her husband, Bill Clinton, drew scorn for his heated defense of Hillary Clinton’s use of the term “super predators” to describe gang members as well as the 1994 crime bill, which is widely noted as being responsible for the mass incarceration of black Americans.

Clinton also lost the Wyoming caucuses to Sanders on Saturday, although she has garnered more delegates overall than her opponent. Clinton's campaign is also painfully aware that the front-runner has struggled with likability, and that she's less popular than Sanders among young people, many of whom surely watch SNL.

For this reason, it's hard to really blame Clinton for taking advantage of any and all chances to connect with voters, even if she ends up looking somewhat silly in the process. You can't fault her for trying.